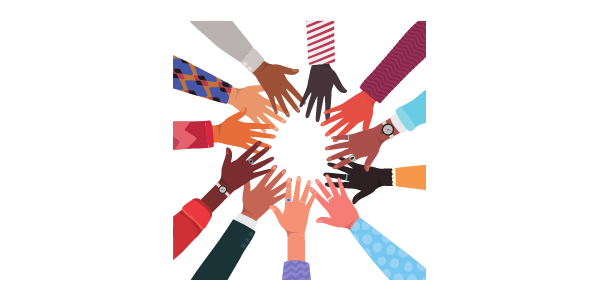 It’s a common refrain among teen librarians: “I just can’t get teens to come in.”

COVID- 19 hasn’t helped and teens are incredibly busy with obligations to school, extracurriculars, work, family, friends, and more. Aside from offering tools and resources to help ease the burden of those loads, there is little librarians can do about their overload of commitments. But we can make an effort to make the library more welcoming for teens. Restorative justice can be a piece of making the library a respite from teens’ busy lives by flipping the way many of us already use the reparation model. Restorative justice as a method to make amends has found its way into schools, school libraries, and more recently, public libraries.[1]

Frequently, reports describe restorative justice in situations where a patron enacts harm either on another patron, the library and/or its staff, or some combination thereof. A group of teens are excessively loud, for example, and library staff ask that the teens participate in a restorative justice circle with complainants in order to determine a mutually satisfying way forward. We so often see teens described as the perpetrator in restorative justice, making it easy to reinforce stereotypes and biases about teens. In that, there is opportunity.

When I first heard of restorative justice, which has a long history in indigenous cultures across the world,[2] I immediately thought of the teens who frequently behave in ways inappropriate for the space at my library and how, sometimes, it can feel like purposeful antagonization. This drew me to wonder if perhaps “acting out” was a response to feeling harmed by the library as an institution and the greater community. In other, simpler words: was this teen behavior in part payback? I don’t expect teens to understand the complicated neurological workings of their brains when even neuroscientists don’t have human brains all figured out. Having once been a teen (even as the “pleasure to have in class” variety), I can recall behaving in ways I didn’t understand. Still, we can ask teens questions to help guide us all to identify the catalyst of a behavior. In my experience, the first several responses are a mumbled, “I don’t know,” when asking teens why they are doing what they’re doing. Occasionally, though, there’s a breakthrough and a teen shares they’re “just so angry,” or more specifically they’ve “had a bad day,” or, even better, that I’m a “[insert expletive insult here].” Now we’re getting somewhere. Neither I nor the library as an institution can right the wrongs of society’s treatment of teens in general. And some behavior is just developmentally appropriate, even when generally annoying. Pushing boundaries and exploring are parts of teen development.[3] For behaviors that are a response to injury, there is a path forward. In these situations, it’s as simple as using restorative justice models to make amends, this time identifying the teens as the victim and the library and/or staff as the harmer. If teen behavior warrants, there can be value in flipping the roles to what we have typically seen in the employment of restorative justice in library spaces, too.

What’s more, because of those long-lived stereotypes about and perceptions of teens, we can take another step and assume teens who have never visited the library have been harmed by it as an institution or by its staff. This is an under-utilized restorative justice approach that has the potential for great success. If libraries assume we’ve harmed teens from the start, we can invite new-to-us teens to participate in restorative justice. We can give teens the opportunity to be heard on ways the library has done harm perhaps without even realizing it and what we might do to make amends for teens who are present, for teens who are not, and potentially for teens of the future.

How might this work practically? Imagine: You’ve gathered some teens on the premise of using restorative justice to plan the new teen space (maybe you don’t describe it that way in promotion, though!). If they’re not a group looking to start spilling right away, you can prompt with, “What doesn’t work for you in the current teen space?” and “What makes you not want to use the current teen space?” and “Tell me about a time you felt uncomfortable in the teen space.” You may be surprised to hear about how, for one teen in your group, books on the bottom shelf are physically inaccessible. You dig into that more deeply, asking questions about what would work. Another teen says they don’t like to use the teen space because he feels like he’s always breaking rules but doesn’t know what they are. You determine a way to simplify the rules or post them clearly as well as involving the teens in policy design as much as possible going forward, including a specific set of rules for the teen space that are written by the teens
and still fall within greater library policy. A third teen tells you he’s been made to feel uncomfortable several times in the teen space because caregivers in the children’s area next to the teen space always give him dirty looks. You brainstorm options with the teens to mitigate this. You may not be able to say yes to everything, but the effort along with the yeses you can say count.

In a way, we have skirted the edges of doing this as a field. In teen services courses and training, students often hear about the importance of involving teens in decision making whenever possible. Restorative justice helps to frame this discussion just a little differently and demonstrate to teens that someone on the staff is trying to be “on their side.” With restorative justice applied to planning with and for teens, libraries can draw in teens who are disenfranchised either because of personal history or anticipated harm based on historical damage the library has done to others in their demographic.

Libraries will still face challenges promoting these restorative justice events. Here, libraries can continue to think with that same restorative justice mindset: Teens are perhaps harmed by their town offering limited travel options to get to the library. To right that wrong, the library meets them where they are as much as possible: digital spaces, school, etc. The library may recruit teens to reach peers with an emphasis on those who are reluctant to visit the library and its use offerings. Plus, restorative justice works both formally at, say, teen advisory board meetings, and less formally in casual conversations with teens. Often, I learn new uses for things that have established uses from teens. My favorite example of this is the game Among Us, originally a mobile whodunnit survival game that teens retooled to play virtual hide and seek until, in December 2022, game developers responded by creating a hide and seek mode. We can hack restorative justice to aid in planning teen spaces, services, programs, and more all while getting teens in the door to build better, more productive relationships that will serve us all.