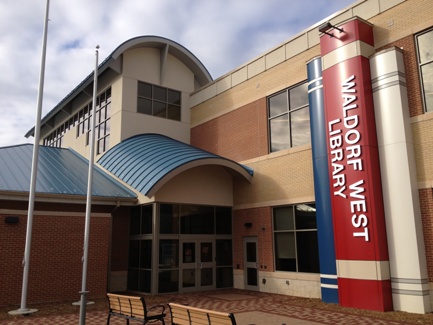 Everyone knows that our national economy is still struggling toward recovery after the fiscal collapse known as the Great Recession. Not surprisingly, the sluggish economy has negatively impacted funding for a variety of government operations, including support for public libraries. Data included in the American Library Association’s 2012 “State of America’s Libraries Report” noted that “twenty-three states reported cuts in state funding for public libraries from 2010–2011 to 2011–2012. For three years in a row, more than 40 % of participating states have reported decreased public library funding.”

In spite of these circumstances, I have seen a number of library systems in my home state of Maryland make important progress – including targeted service expansions – in recent years. Last month, I toured the new Waldorf West Branch of the Charles County (Maryland) Public Library. This 30,000-square-foot, Leadership in Energy and Environmental Design (LEED)-certified building is a wonderful sight to behold. This $4.6 million project incorporated design features like: a dedicated children’s area (complete with lighted constellations on the ceiling), six self-checkout stations, radio frequency identification (RFID) technology for materials tracking, and a drive-through customer book drop.
I am also proud to say that the Baltimore County Public Library (BCPL), where I serve both on the Board of Library Trustees and as president of the BCPL Foundation, has added no fewer than three new branch library buildings, with a fourth scheduled for completion in March 2013, since the onset of America’s current economic difficulties. Also during this time, our library team was able to complete significant renovations to several other branches.

It must be noted that part of the reason why expansions such as these were able to come to fruition was due to Maryland public libraries seeking out creative financing options. Positively, the State of Maryland, through its County Library Capital Project Grant Program, has made as much as $5 million available annually to help support local library construction projects. Also, BCPL and other systems have been able to tap into funds raised through their associated foundations. Charles County went one step further, by successfully garnering support from the Bill and Melinda Gates Foundation, in support of renovations to three of its branches.

Budget tightening does not necessarily need to result in service reductions. I believe that the challenge for library professionals is to think creatively about both the use of existing resources while also seeking out non-traditional funding streams. Of course, the diligent efforts of public library staff members absolutely must be bolstered by the active advocacy efforts of trustees and other library supporters. These citizens can very effectively carry the message about the importance of libraries to local decision-makers. Absent this sort of direct lobbying, county government officials – who must juggle numerous priorities and stakeholder groups – could more easily get away with cutting back on public support for libraries.

It took Charles County Public Library two years of work to complete the just-opened West Waldorf Branch. Library director Emily Ferren indicated that this process simply could not have taken place were it not for the support of the Board of County Commissioners, who knew how important libraries were to their constituents. This support was clearly stated in remarks from Commissioner Gary Hodge as part of the September 2010 ground-breaking ceremony. Hodge noted that the new library “will belong to the community it serves. We’ve got to keep investing in the future. We have a great future in front of us in Charles County.” Investments in libraries can indeed lead to a bright future for communities everywhere.
Jeffrey is presently reading “Memoirs of Harry S. Truman: 1946-52, Years of Trial and Hope.”