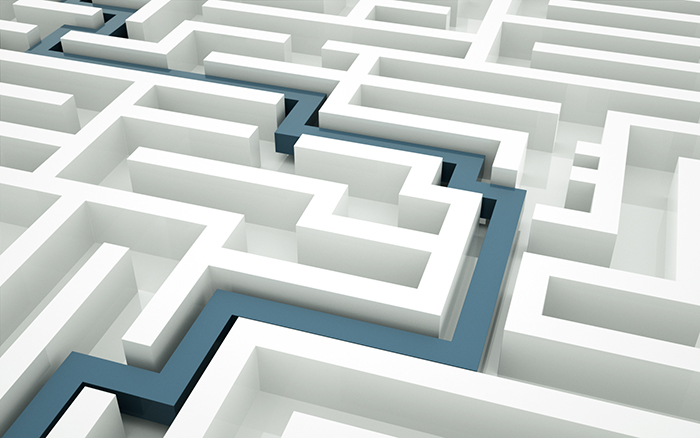 As many libraries have begun to decrease print collections or restructure their environments with a more technological or working spaces bias, how we order our space has become a popular topic of discussion. While the term “wayfinding” is often spoken of as being a relatively new phenomenon – or at least the mainstreaming or interdisciplinary co-opting of it – it could not be more innate to our daily functions. Quite directly, it is the process of how we get to or from a particular destination. Most often, these navigating “decisions” occur on a passive level in the most banal of circumstances– the path we take through a toy-cluttered living room, how we weave through an aisle of label-readers at a grocery store – but this ability and process  is nothing short of astounding. In a nanosecond we continually acquire, process, reassess, recall, and respond to different stimuli and objects.1 Were these replicated by a computer, the capability to process and continually reprocess such complex unstable conditions and variables at warp speed would be considered nothing short of super – yet when accomplished by ourselves, it seems less fantastic. I would argue that this is not because we don’t find the process fascinating, but because its use is so “regular” and constant and occurs at such a low-level of our consciousness that we are mostly unaware of when we are practicing it.

For the sake of re-instilling some romanticism back into this relationship we can deconstruct the process through a more dramatized scenario – a skier or a mountain biker atop a tree-scattered mountainside. Occurring in a flash, and perhaps imperceptibly, we demonstrate a natural ability I like to refer to as “seeing the line,” which is to say intuitively constructing a cognitive map (mental image) of how we will move through the space and get to point A from point B. But broken down more slowly, the internal process consists of:

While this downhill example represents a simple, complete conceptualization of start-to-finish wayfinding, in many instances of everyday life, we cannot see the “finish line” from our starting point. In relocating this process to a public library we often similarly lose this bird’s-eye vantage point. Indeed, when entering most buildings, the space we are about to navigate (including our destination) cannot be seen all at once, and, obviously, the environments become more complex. So in building or reconfiguring our library environments with fluid spatial organization in mind, we begin to look at principles of design known as wayfinding mechanisms in order to find or restore simplicity:

These 4 mechanisms illustrate how wayfinding is made easier though spatial organization (ordering functions and facilities to create an effective circulation system) and environmental communication (architectural and graphic information)4. Wayfinding on a whole is largely concerned with organization, and considers any navigable space for how well it communicates its message, or purpose. Designing a space, as a graduation of this idea, is similar to how one arranges the contents of a book. The cover of the book with title and author is the building’s façade and nameplate; the contents’ page and chapter divisions are the departments; the contents of each chapter are represented by the contents of each department’s collection; and the index of the book might mirror the detailed cross-referencing provided by the catalog. We respond to packages that are clearly defined and sensibly contained.