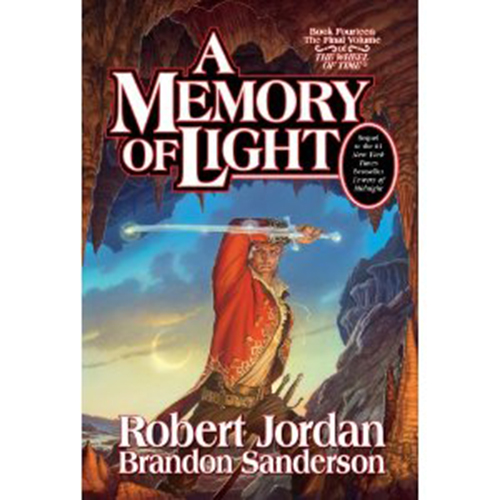 “What was, what will be, and what is, may yet fall under the Shadow”

On January 8th, 2013 the final book in The Wheel of Time series, A Memory of Light, was released to a very hungry legion of fans who have waited for this story for two years since the last book was published. Weighing in at 912 pages and 2.5 pounds, it took me six days to read the entirety of the final story. Within its first week, A Memory of Light became the No. 1 Bestselling book on the New York Times Best Sellers list. Since I would hate to ruin this book for anyone who hasn’t read it yet, this review will contain no spoilers. I ask that you please keep to this rule in your comments so that others may enjoy the story in its entirety, and I invite you to engage me by email or Twitter on the story if you have already read the book.

On to the review!

My first impressions of the story are that it was extremely well crafted, and that Brandon Sanderson has done a masterful job bringing this epic story to its ultimate conclusion utilizing the notes and partial chapters left behind by Robert Jordan after his untimely death in 2007. The book begins immediately following the dramatic conclusion from the 13th book, Towers of Midnight, where our heroes discover the city of Caemlyn burning from an attack by the Dark One’s forces, while other factions of the Light prepare to meet the Dragon Reborn at the Fields of Merrilor, where he will announce his plans for the Last Battle.  There is no skimping on the battle sequences, which in previous books have left the reader wanting more, and these sequences begin fairly quickly in the book as the assault by the Dark One gears up to overrun the land in permanent shadow. There are surprises waiting around every corner, and each new page brings new revelations. Events from previous books return to have chilling consequences as the story progresses.

Fans of the series, like me, will be pleased with this conclusion to the epic series began 23 years ago by Robert Jordan (The first book, The Eye of the World was released January 17, 1990).  The story is a roller coaster ride from start to finish, and even has moments of intense emotion as characters begin to fall into their place and the battle heats up. I must warn, however, that readers of this series should not expect everything to be explained. Team Jordan have not answered every question that has arisen in the series, and one must wonder if more will be revealed in the forthcoming Encyclopedia of the Wheel of Time. With that said, this is an amazing book from start to end. It is a fitting conclusion to the world of Robert Jordan, though it left me pining for more as a truly great series should.

I am extremely sad to see this series end. As I flipped through the last few pages to the conclusion, I found myself thinking “Now what will I read?” much like I felt at the conclusion of the Harry Potter Series. Few series have captivated my interests or spurred my imagination quite like the Wheel of Time. Ultimately, it is a highly satisfying read, and you leave the series feeling like this epic journey to save the world has come to its logical conclusion. I highly recommend this epic conclusion to all fans of the Wheel of Time, and every library should stock this highly anticipated book on its shelves. It is guaranteed to be much sought-after.

Currently, A Memory of Light is available only in print and audiobook, but you can expect an e-book edition by April 2013.