The Public Library Data Service (PLDS) is an annual survey conducted on behalf of the Public Library Association (PLA) where public libraries from the United States and Canada provide information on finances, library resources, annual use figures, technology, and additional yearly special categories. Access to timely, accurate, and relevant data is an essential component for public libraries for comparative analysis and to validate administrative functions. The PLDS has been providing such data to the library community since 1988. The raw results and some summary data of this survey are published by PLA as an online subscription longitudinal database containing six years of data and as yearly print reports (www.pla.org). Rather than duplicating results available directly in that report, this recurring paper presents trends and insights across the data and across population groups.

This study used data from the PLDS 2011 Statistical Report. For the second year, all public libraries in the United States and selected Canadian public libraries were invited to participate in the survey. Postcards in two rounds separated by two months were used for invitations to all libraries (9,269) complemented with three e-mails to the set of library respondents from past years who supplied e-mails that remained valid (2,215). The number of respondents continued to increase this year with 1,603 libraries responding to the request for data, a response rate of 17.3 percent (an increase of 5.4 percent from last year). However, due to the voluntary nature of this survey, there was a high dropout rate, and many libraries had to be contacted for additional data. Although only 1,461 libraries were included in the final data analysis, this number still represented a significant rise over last year’s number of 1,105 and 852 the year before that. An even higher response rate may have been possible with more advertising of the survey and if a more expensive distribution method of invitations was utilized,but an overall increase in total responses was still achieved. If libraries could quickly report state survey data that directly correlates with PLDS data, an even higher response rate could be achieved; however, there is not a one-to-one correlation among all surveys, and the reporting time of the PLDS survey is much quicker than the state surveys. In the end, 1,461 libraries completed more than 15 percent of the survey, were validated following data checking, and were included in the final report and online database. For each of the continuous variables, the following statistics were obtained for this report: number of libraries reporting, minimum, maximum, mean, standard deviation, and, when appropriate, t-tests and ANOVA. For each of the categorical variables, frequencies of responses, percentage of libraries responding, and chi-squared, when appropriate, were computed. Calculations were completed using Microsoft Excel 2010 and SPSS v.19 (www.spss.com). For copies of the survey and full wording of the questions included, please refer to the statistical report or longitudinal database. 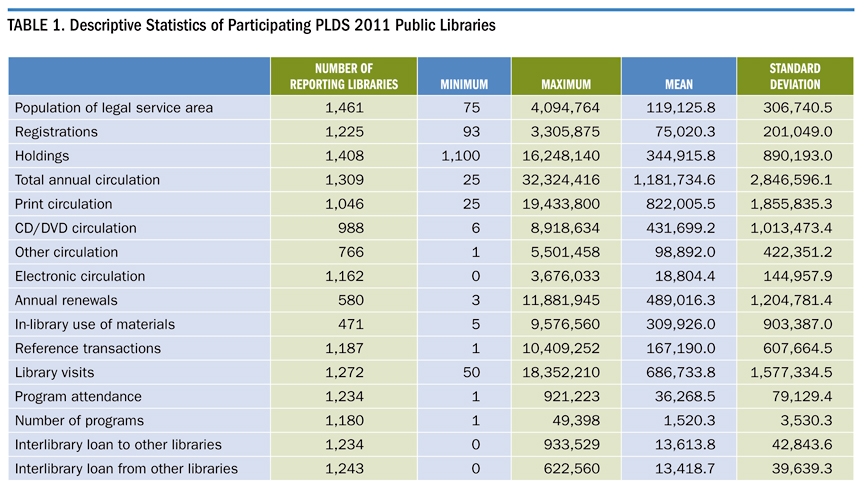 Table 1 provides a statistical summary of selected characteristics of participating PLDS 2011 public libraries. The responding libraries in the 2011 PLDS Report ranged in size from those serving 75 to 4,094,764 people in their legal service areas. Figure 1 presents the distribution of participating libraries by population of legal service areas represented. The expanded survey pool allowed for an increased level of participation among libraries with smaller legal service areas even more pronounced than in previous PLDS surveys. As expected, this change in the research pool changed overall statistical averages, but did not affect many statistics when pooled by population groupings. Overall for the 2010 fiscal year, 1,225 PLDS libraries responding to the appropriate questions served 91,899,913 registered patrons and a population of 174,042,789 in the United States and Canada. Both numbers represent a large increase from last year. 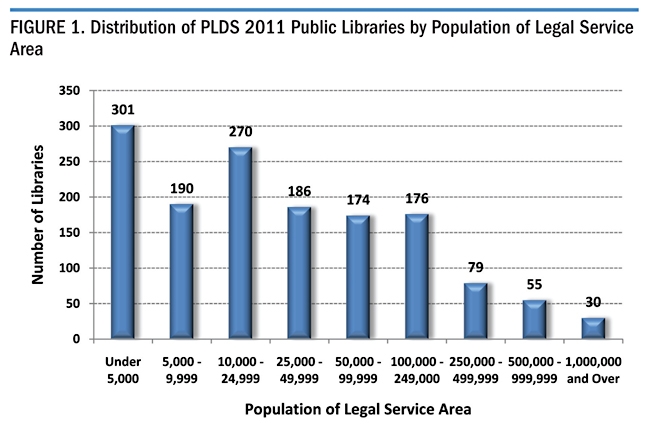 In other areas of service, PLDS libraries on average performed 167,190 reference transactions, had 686,733 library visits, provided 1,520 programs to 36,268 patrons, and provided 13,614 materials to other libraries while receiving 13,419 materials from other libraries annually. All of these total pool  numbers represent decreases from last year and reflect the change in population sample.

The population of legal service area of individual libraries influences many relevant output measures. Several of these measures are visualized in figures 2–7. For some of the trends analyzed, a pattern can be seen in the visualizations as in past years. For example, when viewing library registrations as a percent of population (see figure 2), the percentage increased greatly as the population size decreased, going from 53.53 percent to 92.28 percent, and the differences in number of registrations across population groups were statistically significant (F(8,1216)=8.950, p<0.001). Smaller population area libraries tended to register a larger proportion of their legal service area as has been seen in past years. 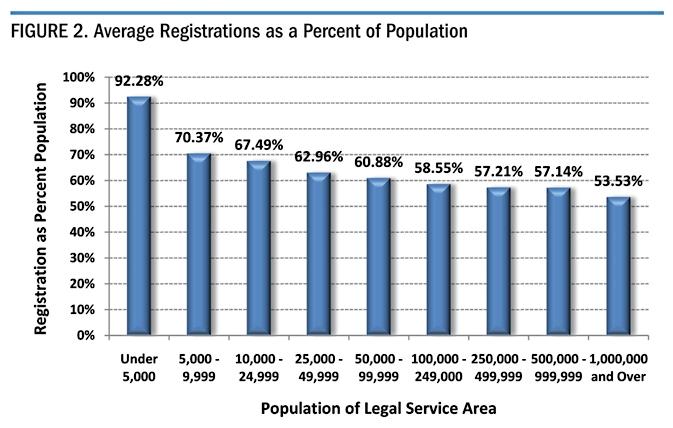 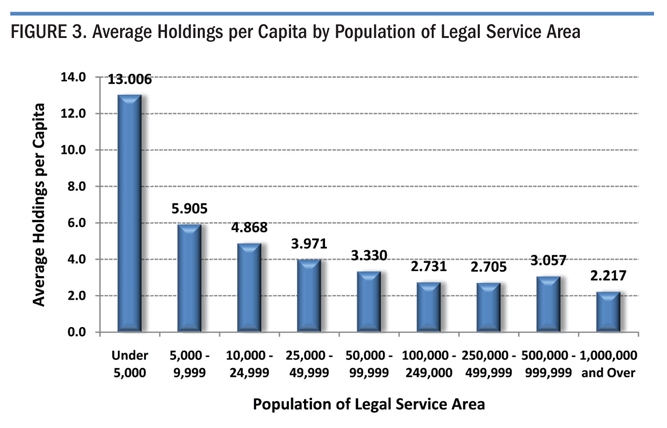 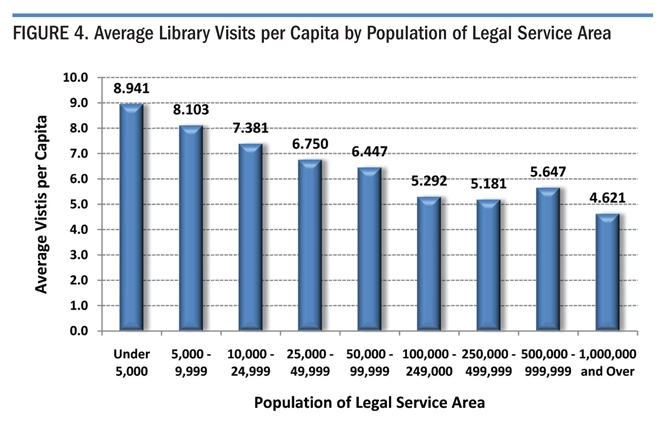 Like last year, in-library use of materials was the least kept statistic, and it saw the largest number for libraries serving a population below 5,000. However the second largest number was for libraries serving a population of 1,000,000 and over with middle sized populations having the smallest values (see figure 5). The pattern for this statistic continues to change from year to year. The average in-library use of materials per capita for all libraries reporting was 1.80 (n=471), representing a slight decrease of 1.1 percent. Despite the large differences across groups (a range of 45 percent), the small number of respondents resulted in no statistically significant difference across population groups in this statistic (F(8,462)=0.729, p=0.666). 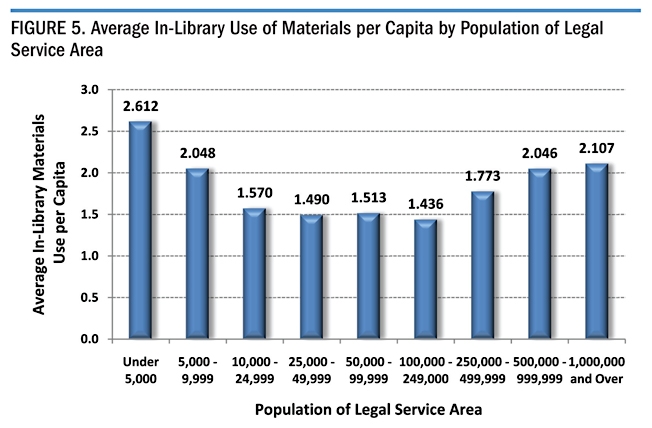 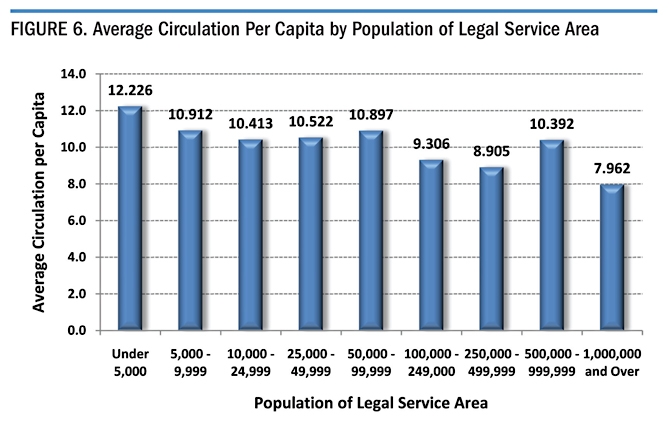 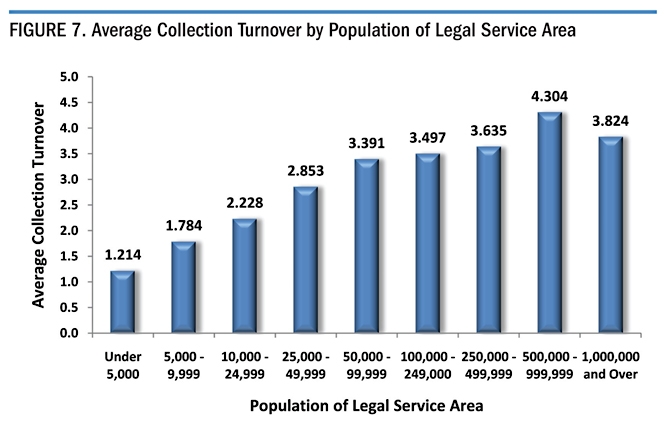 While overall averages are reported here and are a useful means for a general picture of library services, the net effect of the change in survey population two years ago has resulted in an overall adjustment in all of the given averages this year even when compared to last year’s overall averages. It continues to be important to look not just at overall averages but also at population grouping averages. When one looks specifically at a single population grouping, a certain value may be more informative for a given library. For example, if one looks at average circulation per capita for most library populations, they appear close to last year, but for libraries serving a population below 5,000, the net percent change was 23.7 percent as opposed to the 0.8 percent for the sample as a whole. Being able to make such comparisons highlights the usefulness of comparative data in an online database. 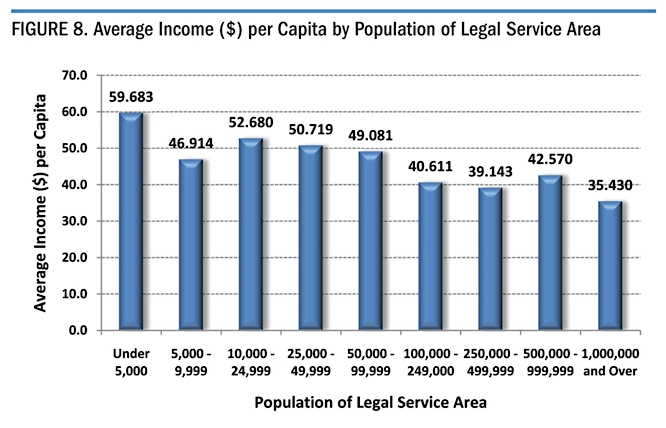 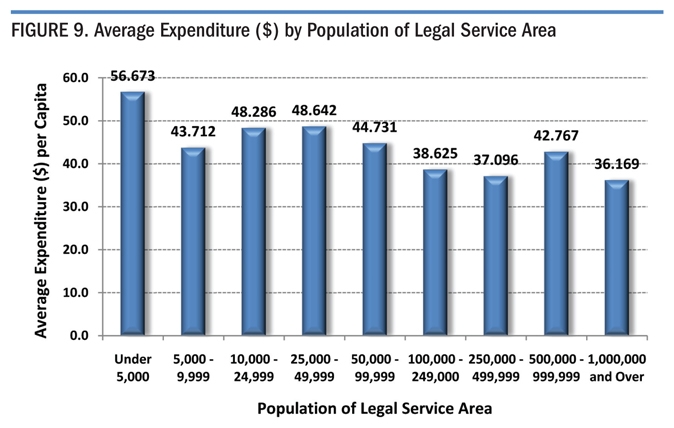 Although income and expenditures are usually compared against total population, resulting in significant statistical results in prior years but not this year, when they are compared against total registrations, a different result is usually seen. Fluctuations in income per registration (F(8,1132)=0.329, p=0.955) and expenditure per registration (F(8,1143)=0.392, p=0.926) were not at all different by population grouping. Libraries tended to acquire and spend money equally based on the number of registrations. 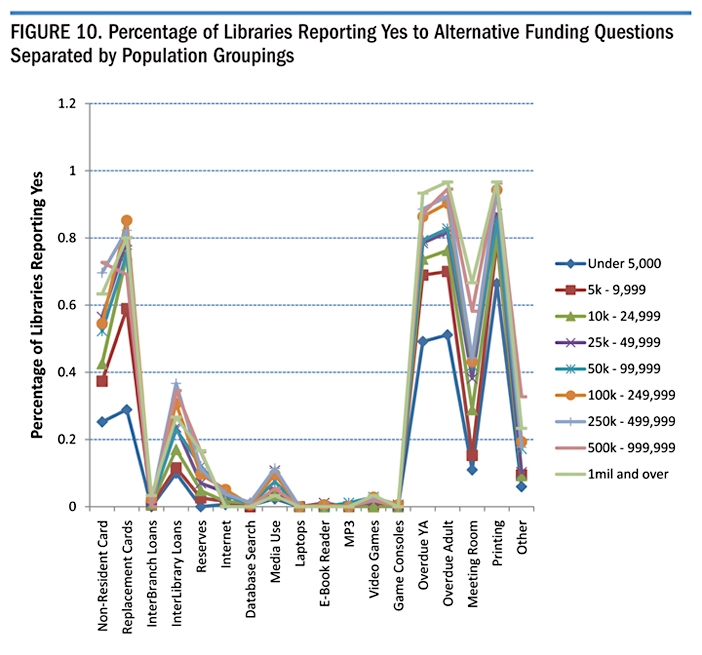 The special section in this year’s PLDS survey covered library finances and alternative sources of income. Variability and range in terms of governmental sources of income and alternative sources of incomes was clear and shown in the PLDS Statistical Report and not repeated here. A Chi-Squared analysis of items for which libraries charge showed that either there was a significant difference by population group because of the high variability in whether any given library charges or there was no significant difference because very few libraries charge for that feature, basically making the analysis meaningless. A graphical representation becomes more meaningful. Figure 10 summarizes the percentage of libraries reporting alternative funding sources parsed by population group. In general, the larger the population group served, the higher the percentage of libraries that charge for an item. Printing (n=1,200), overdue materials (n=1,102), replacement library cards (n=956), non-resident cards (n=668), and space rental (n=447) were the most common alternative funding sources overall. Several items were rarely charged fees as the graph shows. Common other options entered as charges that might be considered for future surveys included headphone rental, lost and damaged materials fees, flash drives, and exam proctoring.

Technology continues to be a major component in the modern public library that has become almost indispensable in numerous aspects. This year, the PLDS survey altered slightly to include social networking questions while removing Internet filtering and other questions such as basic library information on websites that were already present at most libraries. All questions were converted from check boxes to yes/no questions as well to better gather statistics.

The majority of PLDS libraries made use of numerous website features as shown in table 4. The number of libraries that reported having a website remained steady at 95.79 percent. The contents of these websites remained relatively constant with programming information/events calendars up slightly (97.04 percent), online catalogs down slightly (86.40 percent), and community links (82.46 percent) being the most prevalent items. Other website features were less prevalent, but ADA accessibility, staff created content, personalized patron accounts, and tracking of database usage were all present at greater than 60 percent of the time. 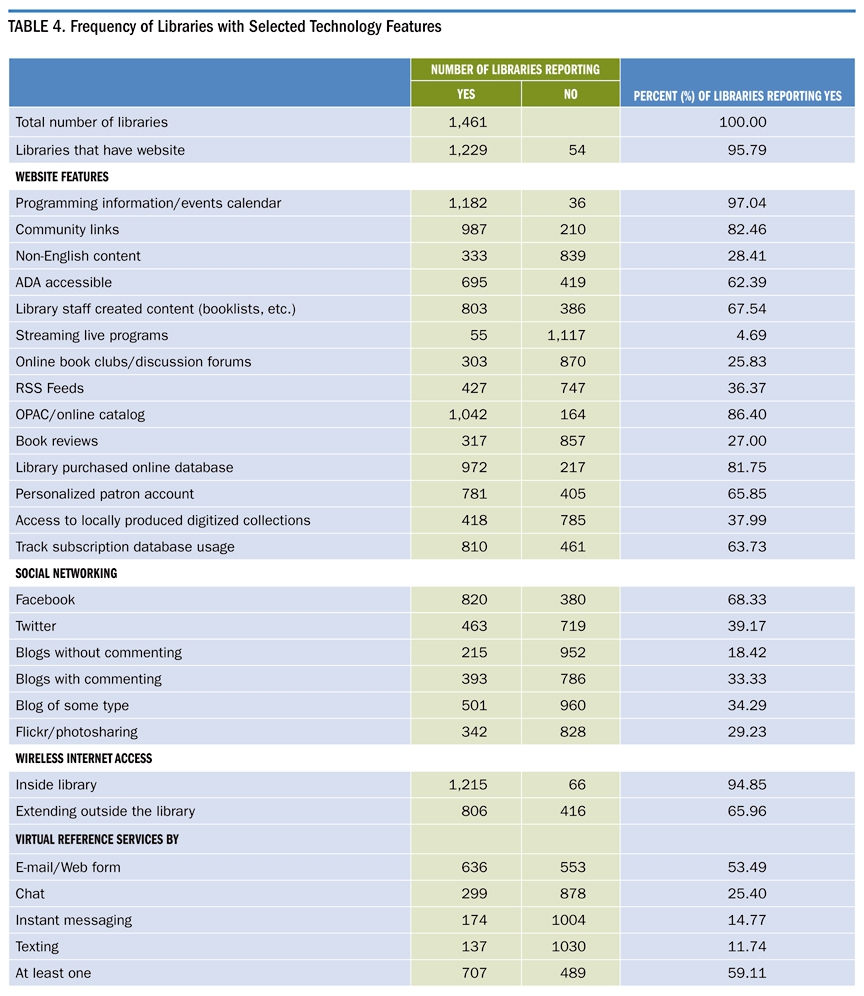 Social networking demonstrated its importance to public libraries. Facebook sites existed for 68.33 percent of responding libraries, and Twitter accounts existed for 39.17 percent. Out of 1,461 libraries, 501 (34.29 percent) reported having a blog of some type as well. Even 29.23 percent of libraries reporting had some form of photosharing service functioning. Wireless Internet continued to be important as a service to patrons. The availability of wireless Internet remained high this year at 94.85 percent. Furthermore, libraries with wireless Internet access extending outside the library rose again from 60.70 percent to 65.96 percent.

The 2012 PLDS survey will run from January to April 2012 and will include a special section on young adult services, which have not been covered since the 2007 survey. Any library not receiving an invitation is encouraged to contact PLA for more information. The PLDS online database will also be undergoing changes in the coming year as it moves vendors to Counting Opinions, with the potential for added features and utility, although the current system already proves very useful. Finally, as more data becomes available, a more thorough longitudinal analysis can be performed to track trends across years that might highlight the impacts of recent events across library statistics. One can look forward to a view of these trends and the discussions they may create.