Josh Hanagarne is the world’s strongest librarian. Why? Well because he is over six feet tall, is a body builder that has been known to lift and throw 45-pound plates and kettlebells, and has won many strongman contests. Oh, and he also has Tourette Syndrome. 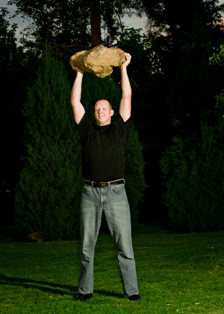 In Hanagarne’s memoir, The World’s Strongest Librarian (ISBN-10: 1592407870; ISBN-13: 978-1592407873), out May 2nd, he shares his life story of books, libraries, faith, and disability. In fact, each new chapter begins with Dewey Decimal numbers that will give the reader a good idea of the chapter’s subject matter. And will cause any librarian’s chest to bloom a bit with pride.

While still in his mother’s womb, he was introduced to the library. His mother made several trips to her local library before his birth and after. As a result, the public library was a favorite place for Hanagarne to hang out. “The library has everything I care about. There’s always something new to find at the library, something else to learn about,” says Hanagarne.

Books became a haven for this future librarian when Tourette Syndrome, which is a disorder that is characterized by multiple physical tics, showed up in his life around the age of six. As he progressed in years, so did the condition. Verbal and physical tics were prevalent and highly disruptive to daily living. He even gave the condition a name, “Miss T,” which progressed into Misty. Misty showed up at home, at church, in the classroom, on dates, and even in sleep. Frustrations with different medications, Botox injections and even trips to a “healer” led to depression. It took him about 10 years to complete his undergraduate program. Towards the end of his undergraduate program, he was working part-time at a public library where he was introduced to some college recruiters who excitedly promoted their MLS program. “If you’re excited about something, you can get me excited about whatever you’re excited about. And these library recruiters were pretty peppy.”

He attended a MLS program at University of North Texas, most of which was online. When he did go to Denton, Texas, for orientation to the program, he was introduced to the program by a slightly crazed professor who guzzled soda and pastries during her lecture. This unique professor is just one of several characters that readers will meet in this memoir. Thanks to Hanagarne’s gift of humor, good writing and honesty, this book is full of tears and laughs to last many a library book group discussion.

He is now a librarian at the Salt Lake City (UT) Public Library, as well as a loving husband to Janette and proud father to five-year-old Max. He hopes that his son will enjoy reading as much as he did but is not willing to push. Right now Max’s literary aspirations extend to books about “things that smell bad.”