Promiscuous in My Reading: A Conversation with Lauren Beukes 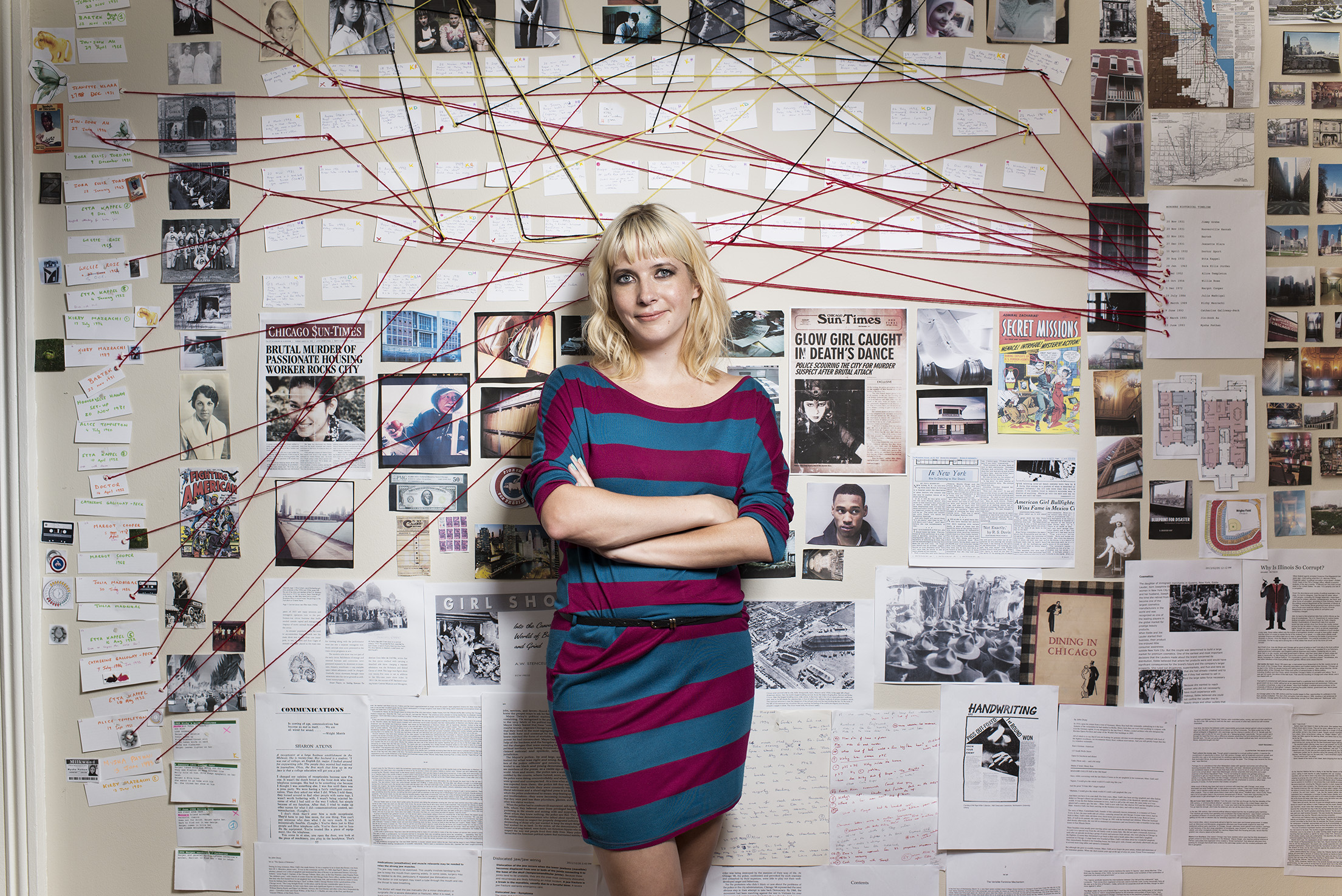 South African writer Lauren Beukes’ first two novels, Moxyland and Zoo City, were hailed as innovative takes on the sci-fi genre. With her  new book, The Shining Girls, Beukes tackles the serial killer genre and comes up with a novel that is equal parts gripping and horrifying. The Shining Girls details the exploits of Harper Curtis, an unhinged grifter in Depression-Era Chicago who discovers a house that enables him to travel through time. From there, he hops through sixty years of history, visiting his victims in their youth to give them an anachronistic keepsake and then killing them years later. When one of his intended victims, Kirby Mazrachi, survives his attack, she investigates her assault and begins the nearly impossible task of tracking Curtis down. Suspenseful and unsettling, The Shining Girls has already been longlisted for The CWA Gold Dagger Award and has appeared on numerous must-read lists of the summer. Beukes discussed The Shining Girls with Brendan Dowling via e-mail on August 14th, 2013. Photo Credit: Morne van Zyl.

Public Libraries: The book has such a strong sense of place and covers a lot of important periods in Chicago and the U.S.’s history (the Depression, the Red Scare, the Democrat Convention Riots, pre-Roe v. Wade). How did you select the different time periods that Harper operates in? Would there be any eras where Harper wouldn’t have been drawn to?

Lauren Beukes: The ways we’re haunted by history is a major theme in my work. I picked out particular moments that resonated with where we are right now. Our current ongoing recession has echoes of the Great Depression, for example, while the War on Terror and the Red Scare use a lot of the same tactics, the riots of the 1968 Democratic Convention gave the Occupy movement their most famous slogan, “the whole world is watching”, homophobia and transphobia is still rife today, and women’s right to control their own bodies is, somehow, still an issue that’s up for debate.

Harper is drawn to particular eras and particular women because it’s a pre-ordained destiny, a self-fulfilling prophecy and curse, and there’s a reason he can’t go past 1993 – but to get any deeper into that would be very spoilery.

PL: You grew up in South Africa. Do you think being from another country gave you a special perspective on U.S. history and pop-culture?

LB: I think it’s useful to be outside of something, standing on the bridge to better see the currents. But you also need to be able to jump in to the river and have the water close over your head and swim through the cold and bash your knee on a rock and feel how it moves you.

Like most of the world, I’ve grown up with American pop culture, but I’ve also lived in New York and Chicago for about a year over 2000 and 2001 and in 1996, my brother and I did a road-trip across America in a ’68 VW Beetle that broke down every second town. And I went back to Chicago on a research trip in 2012, while I was writing the novel, to find the details and the texture that books and documentaries and research online just can’t give you in the same way.

Growing up in South Africa has influenced who I am as a writer. I’m very interested in racism, gender violence and social injustice. I see a lot of Johannesburg in Chicago – a shining city with major problems.

South Africans like to think that we do corruption and crime and segregation best, but those are universal issues, from Spain to Russia, and they’re very much part of Chicago.

PL: One of the most unsettling aspects of the books is how deeply the reader cares about each of Harper’s victims in such a brief amount of page-time. How did you balance the tone in these sections, to keep the violence palpable without becoming exploitative?

LB: I focused on the emotional impact of the violence. Mostly, those scenes are written from the perspective of the victims. You’re with the women, feeling their fear and horror and outrage, rather than doing a ride-along with the killer. I tried not to linger on the details, but I need to hold your head and force you to look – and there will be at least one shocking detail to drive it home.

It’s supposed to be upsetting, because real violence is. This is what it means when someone is killed.

I tried to make it an act of empathy rather than complicity.

PL: The story is told non-linearly–the reader discovers how the House works at the same rate as the characters, and scenes early in the novel take on a new resonance the deeper you get into the book. How did you arrive at the decision to tell your story this way?

LB: It was intuitive – it seemed the best way to let the story unfold, as a puzzle the reader has to solve. I trust my readers and hopefully they trust me in where I’m leading them.

PL: Unlike a lot of procedural novels, you capture the blind luck and the grunt work involved in researching cold cases. Kirby runs up against a lot of dead ends and at some points (quite understandably) fails to observe evidence that is within her grasp. Similarly, Harper commits a murder that’s never discovered. Was it important to you to depict the randomness that can exist within these worlds?

LB: Yep. And I think it’s killing that Kirby has the crucial piece of evidence that will solve the whole mystery in her grasp from the very first chapter – she just doesn’t realize it. Real detective work is grind and labor and trying to find the threads to tie them together, but also leaps of intuition, like pulling the focus – and especially when you have a blatantly impossible mystery.

PL: You’re a self-described “twitter evangelist.” What draws you to that technology and can you talk about the role it played in writing your book?

LB: Twitter is like being at a cozy salon with a hand-picked guest list of the most interesting and entertaining people in the world, but also an open door where anyone from the street can wander in. It’s a medium that lends itself to real-time engagement. You can respond to a favorite writer or interesting mind, and have them reply and or have a random stranger break into a conversation with a cool insight or a witty comment or a moment of delightful silly randomness. There’s stupidity too, but not to the same degree as on Facebook (or maybe it’s just that I haven’t attracted the attention of the trolls). It’s much more of a conversation.

I also use Twitter for research. I’ve asked my Twitter followers for advice on unGoogleable questions, such as the caliber bullets a giant robot mecha would use or the best place to dump a body in Johannesburg, for example. But I’ve also used it as a way to connect to interesting people I wouldn’t have had access to otherwise. I found commander Joseph O’Sullivan, the detective who consulted on The Shining Girls, through his Twitter account, for example, and my followers hooked me up with criminal lawyers, the curator of Chicago’s zine museum, sports reporters and cool culturati like Harper Reed (Obama’s social campaign manager) and Daniel X. O’Neill.

PL: Shining Girls has a very affectionate portrayal of a librarian and at one point Kirby remarks that librarians love her “crazy theories.” Can you talk about what roles libraries and librarians have played in your life?

LB: That was partly inspired by my research interview with longtime Chicago Sun-Times music journalist, Jim deRogatis who was gracious enough to meet me. The descriptions of the building and the librarians he worked with at the paper, and how to bribe them with sweet treats are almost verbatim, although Chet is entirely an invented character.

My school librarian, Elizabeth Todd, was a major influence in my life, not least because she turned a blind eye when I took out more books than I was technically allowed to, probably also because I also volunteered as one of her helpers. She taught me to be promiscuous in my reading, across genre and subject matter.