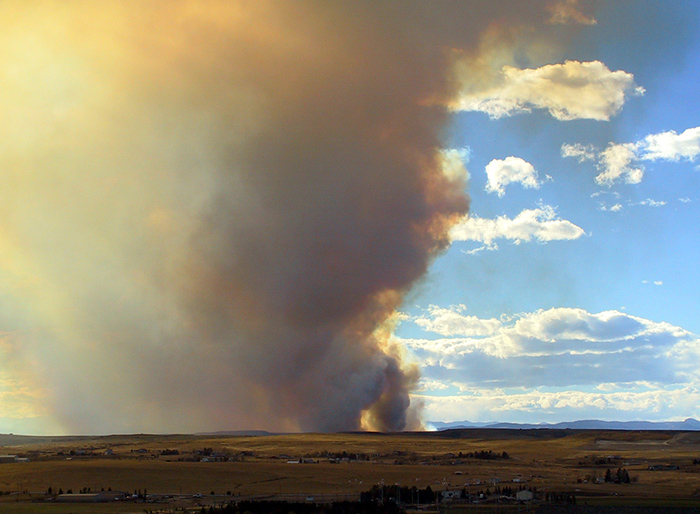 The weather does not seem to have been doing Colorado any favors lately. The last two summers have been particularly difficult for El Paso County, Colorado,  as well as many other areas in this and surrounding states. Due to heat and drought, wildfires have severely impacted our region causing the loss of life, homes, and forest. Many libraries in the affected areas have worked to assist patrons and commemorate events. With two major fires in the last two summers affecting our county, Pikes Peak Library District (PPLD) has responded to community needs both during and after the events.

During the Waldo Canyon Fire last summer and the Black Forest Fire this summer, staff set out to help in a variety of ways. IT staff took computers to area shelters so that evacuated people could use them to find services they needed or connect with family and friends. Story times were held at the shelters for children staying there. Donations of food and books were also collected at the libraries to be taken to the shelters and our local food pantries. A section specific to wildfire resources was set up in our Recommended Websites. Information regarding flooding was also added to this section because of the high risk of flash flooding over the burn areas.

After these tragic events, steps were taken to collect stories and photos to document the history of the city. Poster boards requesting that patrons share their stories were sent out to the various libraries and put on display. People could write down their memories on paper and attach them to the board. These stories were then collected and given to our Special Collections department. This activity provided an outlet for people to be able to share their memories and will provide a human aspect to the fire for others in the future.

Photos were also collected from people who were willing to share them. This summer, a display of photos from the Waldo Canyon Fire was held by the Special Collections department at a few of the libraries. A call for photographs and video from the Black Forest Fire has also been put out. Special Collections has also been using Archive-It to capture digital information from the Internet regarding both fires.[1]

Working with the Colorado Springs Pioneers Museum, our Video Center and Special Collections department interviewed 29 people involved in, and created a documentary of, the Waldo Canyon Fire. Many clips of the interviews can be seen on PPLD’s Vimeo channel. The full interviews have been added to the Waldo Canyon Fire Oral History Project in the PPLD archive. A longer documentary combines these interviews with photographs and recordings from volunteer photographers and donors. This documentary was debuted at PPLD’s Rockrimmon Library, which is nearest to the affected area of the city.[2]

The Rockrimmon Library also sponsored an anniversary event of the 2012 Waldo Canyon Fire. The focus of the event was the power of community to overcome the heartbreak of the fire. The day had a celebratory nature with live music, food, and fun, and reminded us how strong our battered community can be.

Libraries around the country are responding to help their patrons through a variety of disasters, from fires and floods to hurricanes. We are uniquely positioned to be able to provide support during the event, and preserve the information and stories afterwards.