The People’s University Express Book Bike is on the move!  In honor of National Bike Month, the Cleveland Public Library (CPL) joined various library systems in the United States in launching bike-based library service. With the approval of Director Felton Thomas, the encouragement of Deputy Director, Cynthia Lombardo, and the tremendous support of the Director of Public Services, John Skrtic, this traveling library reached out to hundreds of Ohio residents during this past summer. The overall mission of the Book Bike is to celebrate both literacy and healthy living while implementing creative ways to educate, provide library services, and instill pride in our urban communities. It’s a fun and visible tool that we use in areas where it is difficult or expensive for Cleveland residents to park as well as to catch the interest of the constant foot traffic downtown. While the People’s University Express was modeled after several bike-based library services that display informational services and materials to their community during outreach events, it also provides patrons with a library checkout station and a Wi-Fi hotspot. 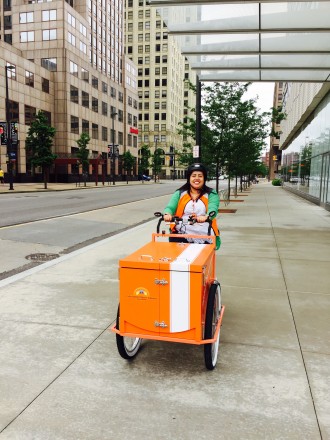 Great Idea
The People’s University Express began as a small dream that was hatched during a discussion with a group of library professionals who were detailing groundbreaking ways their systems were promoting their libraries.  After hearing another professional talk about a traveling library and how they use it to make appearances at community outreach events and schools as well as to give away free donated titles and canceled library books, I sprang into action, believing this would be a great service for CPL patrons!

I decided that it would be an even more phenomenal idea if the traveling library could also provide its patrons with a library checkout station and a Wi-Fi hotspot. It could be an excellent focal point in farmers markets, community events, and could act as a welcoming library hub at any outreach event.  I discussed the idea with my manager, Ms. Annisha Jeffries, Youth Services Manager, who encouraged me to apply for one of Cleveland Public Library’s yearly Innovation Grants for library staff.  Although my grant submission did not win that year, library administration was impressed with the idea and the department was given the funds to purchase a Book Bike.

Book Bike is Born
The People’s University Express Book Bike is a vintage orange, white and black, custom-built tricycle from Haley Tricycles.  As the Cleveland Public Library’s Youth Services staff prepared for each event during the summer, they curated a small library collection according to their target audience.  The Book Bike carried between 30-40 books at a time, and was stocked with best-sellers, children’s books, teen titles, graphic novels, and cookbooks. With the help of a Wi-Fi hotspot, staff was able register first-time patrons for library cards, answer reference questions, and place holds for library materials.  At first glance, Cleveland residents think the Book Bike is an ice cream truck, and ask its rider if they can buy some ice cream.  When staff members respond that it is actually a Book Bike that promotes literacy, they are in shock or begin to laugh. But as long as they come closer to the bike and check out our books, the CPL Youth Services Department staff is fine with the assumption.

Community Outreach
The People’s University Express attended a wide array of library and community outreach events this summer. The Youth Services Department contacted several neighborhood organizations around downtown to inquire if the Book Bike could participate in their events. For example, the People’s University Express attended the Downtown Cleveland Alliance’s Walnut Wednesday, which takes place in one of downtown’s urban green spaces and provides a social space where professionals and residents are invited to unwind while enjoying delicious food from some of the most Cleveland-famous food trucks as well as listen to live entertainment. With the bike-based library service complementing Cleveland’s urban bike community, the traveling library attended the Cleveland Clinic Foundation’s VeloSano 2015: Bike to Cure! VeloSano, Latin for “swift cure,” is a community fundraising initiative for cancer research. At its core, it’s a cycling event where riders commit to raise a predetermined dollar amount, and the rides start and finish in downtown Cleveland. 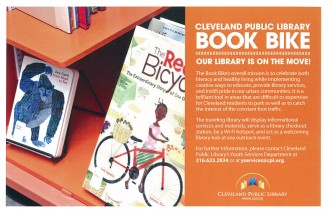 The People’s University Express also participated in the One Life, One Voice, One Community Event at the Cleveland Convention Center. The Cleveland Cuyahoga Partnership to Improve Birth Outcomes organized this free health and wellness event to raise awareness on infant mortality, and provide mothers with everything they need to have a healthy baby, a healthy lifestyle, and a healthy community. As a result, it gained the attention of several Cleveland media outlets this summer.  It was featured on the WKYC Channel 3 News #WeReadHere segment, in an article in the Freshwater Cleveland weekly e-magazine, and was nominated as the winner of Best of Cleveland 2015 by the Cleveland Magazine.

The People’s University Express has proven to be an excellent creative tool to educate, provide and promote library services, and instill pride in the Cleveland Downtown Community.  This bike-based library service is a great way to surprise library patrons who may not necessarily expect to see librarians outside the library institution but rather in unexpected settings throughout our service neighborhoods.

*All photos courtesy of Cleveland Public Library; used with permission.