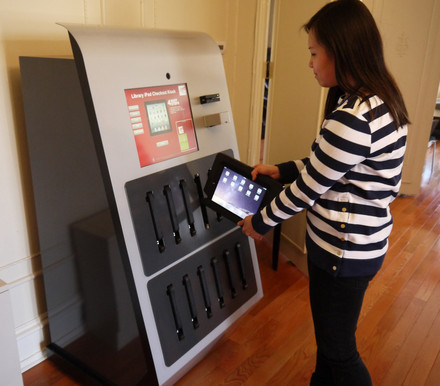 The Toronto Public Library is working on installing a book-lending kiosk at Toronto Union Station, which services approximately a quarter of a million commuters daily.[1] TPL hopes to have the kiosk up and running by April 2016 and to increase its library user base. The project is modelled after similar book-lending systems that already exist in the United States in places like Pittsburgh and San Diego, and the Bay Area, as well as in Europe, Japan, and other parts of Canada. It’s not just going to be books; the plan is to lend out DVDs, video games, and even e-books, as well as popular fiction and nonfiction titles.[2] If the pilot program succeeds, additional kiosks will be put in place throughout the rest of Toronto.

Services like these are another great way for public libraries to showcase their relevance and make themselves more flexible in the modern public sphere. Providing 24/7 access to movies and books in more convenient places for busy commuters who may not be able to access the public library during regular hours is a wonderful opportunity to connect.[3] The kiosks are simply extensions of the same service behind having book drop boxes in areas other than the library: patron convenience. Public libraries in the United States are inputting kiosks at airports as well as local YMCAs and community centers. Japan has kiosks that allow patrons to scan their library card, choose an e-book, and then receive a QR code to scan with a smartphone or tablet to get their book!

The TPL project will cost $200,000 per kiosk and be funded by the city, but other public libraries have used alternative funding sources such as grants to open kiosks in their own cities or towns.[4][5] Beyond being a friendly convenience and service for patrons, having the library represented in unexpected areas is a great advertisement—a reminder to people that haven’t been to a library in a while that we’re still here and viable (and the e-book element is a nice tool to showcase that not only are we here but that we’re along for the modern ride).