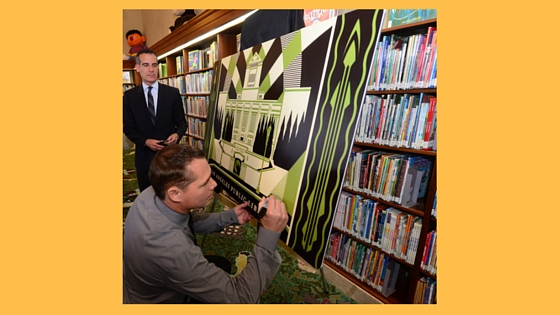 As part of its National Library Week Celebration, the Los Angeles Public Library teamed up with artists Shepard Fairey and Cleon Peterson to re-imagine their outdated purple and orange card.[1] The new green and black design is a stylized illustration of the Central Library in downtown L.A., which is celebrating its ninetieth birthday this year.“Our city is the creative capital of the world—and this collaboration between the Los Angeles Public Library and Shepard Fairey is a great expression of how art can enliven our civic institutions,” said Mayor Eric Garcetti at the April unveiling of the LAPL’s first limited-edition artist-designed card. “It is a beautiful design that will raise awareness about the wealth of resources that our libraries offer, free of charge, to Angelenos of all ages and in every community.”[2]

According to an LAPL press release, the new design is based on an illustration created for the Library Foundation of Los Angeles’s Young Literati Annual Toast fundraiser. Both Fairey and his wife, Amanda, are involved in the Young Literati group.[3] Fairey was involved in the skateboard scene in the late 1980s and later went on to graduate from the Rhode Island School of Design. He is best known for his OBEY clothing and now-famous HOPE portrait of Barack Obama used heavily during the 2008 presidential campaign and later the subject of a copyright case.[4] leon Peterson is an L.A.-based artist whose graphic style often depicts violence and struggle.[5]

Said Fairey in the press release, “When I was younger, I did most of my research for art and design at the library. The L.A. Public Library system also has great tutoring and summer reading programs that are free to the public, and a needed supplement to our underfunded school system.”

The Los Angeles Public Library states in that press release that they serve “the largest and most diverse urban population of any library in the nation.” The new card is available at the library’s seventy-three locations while supplies last.