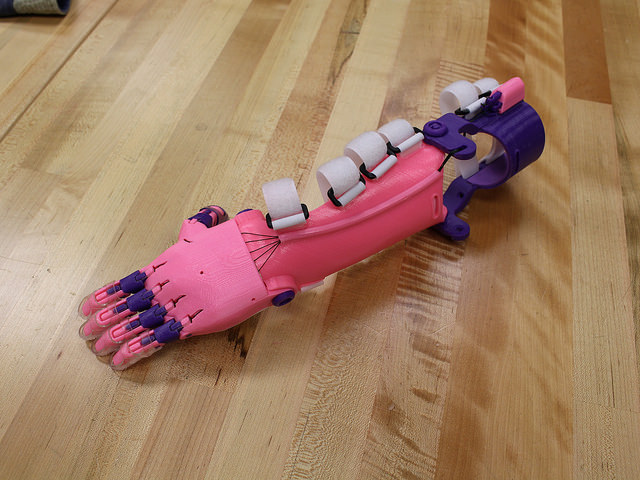 Five-year-old Katelyn Vincik was born without a fully developed left hand and is on a waiting list for a professional prosthetic device. Her parents, however, had heard about the e-NABLE Community, an organization of volunteers who develop and share designs for 3-D-printable prosthetics. Kimberly Vincik (Katelyn’s mother) contacted Harris County (Houston, Texas) Public Library to see what options were available for 3-D printing the required parts. Harris County libraries are home to the Jocelyn H. Lee Innovation Lab, and fortunately for Katelyn, the Innovation Lab is home to a fantastic community of volunteers eager to help.

When Jocelyn H. Lee passed away in 2012, he left a sizeable bequest to the Clear Lake City-County Freeman Branch Library (one of twenty-six Harris County library branches), and Lee’s gift was honored by the creation of a library makerspace—the Jocelyn H. Lee Innovation Lab. This staffed space has gained recognition in the Houston maker community as a valuable resource for equipment access, classes, and a growing culture of maker-patrons. 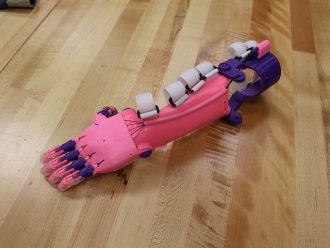 The device was created in pink and purple, Katelyn’s favorite colors. Image courtesy of The Harris County Public Library.

The Vincik family made the two-hour drive to Houston and visited the Freeman Branch Library to meet with staff and volunteers to discuss options for making Katelyn a prosthetic arm and hand. With the understanding that the Innovation Lab team had 3-D-printing expertise but no prior experience with prosthetics, Katelyn’s arms were measured and the team started to work making a device—in pink and purple, Katelyn’s favorite colors.

Innovation Lab volunteer Michael Craig took the lead in preparing the files and printing the parts, but shortly after the project began, all of the lab’s 3-D printers suffered unrelated malfunctions. While staff and volunteers worked to repair the machines, Craig worked with Robert Bannon, another volunteer, to print parts on Bannon’s personal machine until the Innovation Lab printers were operational again.

Once the parts were completed (the device requires approximately three dozen 3-D-printed parts, in addition to fasteners, bands, and other hardware), they were assembled into a working prosthetic arm and hand ready for delivery. The team had concerns about the robustness of some of the smaller printed parts and considered metal replacements but decided to personally deliver the device and send replacement parts later on, if they were needed, after Katelyn had tested it. 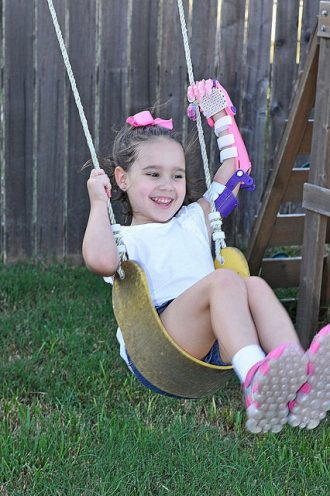 Katelyn putting her new prosthetic to use. Photo courtesy of the Vincik Family.

On a Saturday afternoon in late July, with Katelyn’s extended family gathered for a party, Katelyn was presented with a gift.  “My new hand!” she exclaimed as she unwrapped it and slipped it on. Katelyn’s parents were shown potential weak points, and her father quickly fashioned new hinge pins using parts from the local hardware store. This remarkable group effort— from the support from Harris County library administration, to the fabrication and assembly by volunteers, to key improvements made by the family—demonstrates the value and importance of a connected and informed community in solving real-life problems.

Jocelyn H. Lee valued his public library and the resources it provided. His bequest, along with the ongoing financial support of the Friends of Freeman Library and a dedicated cadre of staff and volunteers, is expanding the Freeman Branch Library’s ability to serve the community. In her note of thanks, Kimberly Vincik wrote, “You have impacted our lives in a way that we will always be thankful for. Katelyn is already a different person in just the two days she’s had this hand. … You are a very large part of that happiness.”

See more images from this project via the library’s Flickr stream and check out the YouTube video below.