Mario Giordano on Sicily, the Two Fs, and his Glamorous New Detective 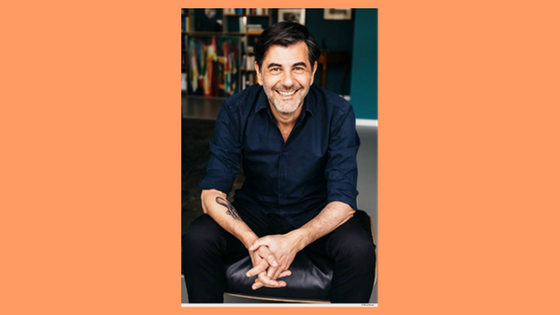 Mario Giordano’s Auntie Poldi and the Sicilian Lions introduces an indelible new detective to mystery lovers in the form of the hard-drinking, charismatic Poldi, a Bavarian transplant who has moved to Sicily to drink herself to death. Her end-of-life plans, however, get interrupted when her handsome handyman is discovered murdered. Poldi soon finds herself thrust into the investigation, uncovering clues while embarking on a tentative romance with the handsome detective assigned to the case. Of Auntie Poldi, Library Journal raved “the true draw of the book is the Sicilian setting and the eccentric Auntie Poldi,” and Alan Bradley gushed “Mario Giordano has created a character who will be the envy of every novelist, mystery and otherwise.” Brendan Dowling spoke to Mario Girodano via telephone on January 18th.

Poldi is this passionate, almost larger than life character. Can you talk about the family member who was the inspiration for her?

I had an Aunt Poldi. She moved to Sicily when she was sixty in order to drink herself to death, and she managed to do it. It took her two or three years. We didn’t have much contact, but she was a very glamorous figure and we all loved her. She drank, she smoked, she laughed out loud, she enjoyed life, and she was very beautiful.

Since I’ve started writing about Poldi, I’ve learned a lot about her. Former colleagues and friends and neighbors have discovered the book and contacted me, saying, “It’s exactly like your aunt was,” which made me very happy. There was always a bottle at work in her desk, but nobody ever said anything because she was the spirit of the company. When there were conflicts, she always moderated everything and talked to people. She was the very heart of the company and that moved me. As in the book, she had two sides, but she was a very well-rounded person. That’s how I remember her myself.

Poldi has so many memorable qualities, one of which is her ability to sense if a place has a good or bad energy, which she refers to as “the binary structure of happiness.” Was that a trait your aunt shared as well?

That was some of my invention, because I have it. I immediately know if a place is good or bad and I immediately know about the energy. All the wisdom of Poldi is of course invented by the writer. I didn’t have the opportunity to talk to her very much, because she died so early. I couldn’t discuss all my ideas with her unfortunately.

It seems that the trait of being able to sense if a place is evil would be invaluable to an amateur detective.

It is, right? And it all fell into place. I initially wasn’t thinking about a murder mystery. Just like the nephew in the book, I wanted to write a big family saga, very juicy and full of drama, but I could never come to grips with it. I finally got the idea to have the idea as my aunt as the protagonist, and then the idea came to make it a murder mystery. It somehow all fell into place.

Not only is Poldi such a vibrant character, but all the people in her town also seem so rich and compelling.

But that’s Sicily. That’s what you experience when you travel to Sicily. You can’t see only the bad things when you look at Sicily, the Mafia or corruption or whatever. With a little awareness, you notice that people are really nice and really weird. When people are nice and weird, they make good characters.

Were any of the other characters based on real people from your aunt’s life?

Sure. The three Sicilian aunts really exist. One of these aunts has unfortunately passed away, but the other two exist, they still live. I had a serious talk with them telling what I was planning to do. At first they laughed and said, “Go ahead.” I had to say, “No no you just wait. You really will be a character. I will change your names and many details, but you will see some stuff and recall some stuff from your life.” And they said, “We’re fine with that.” Actually my Aunt Lucia complained recently how she wasn’t in the second book that much and she wanted a bigger influence on the story. She wanted her character to be more active. So I had to promise her next time there will be more action for her. (laughs)

The relationship with Poldi and her sisters is so fun to watch, how they unconditionally support her with everything she does.

That’s very important. It’s all about family in Sicily. Food and family, the two big Fs! And it was true, when the original Poldi arrived in Sicily, my aunts took care of her and assisted her a lot because she didn’t speak Italian very well. That’s not possible in the book. In the book the character has to speak proper Italian, so there were some changes. But the relationship was quite tender.

One theme that comes up through the book is the idea of the “passato remoto,” which is the narrative tense Sicilians use to tell a story. Can you talk about how the passato remoto affects the way Sicilians think about story?

It’s a very complicated, very difficult grammatical figure, at least for me. It doesn’t connect with the way it’s written and spelled to the original form of the word. You just have to learn it. Usually in Italy it’s not used very much, just in literature. So if you want to read Italian books in the original version, you have to know about passato remoto.

But it’s only spoken in Sicily. And that’s because for Sicilians have been people who’ve been conquered for centuries by so many others—by the Normans, the Phoenicians, the Greeks, and the Romans. So they’ve developed a sense of living in the here and now. The past is always past, it’s really gone forever. Old people really use the passato remoto. For them, it shows that even yesterday is not something that plays a role anymore.

Why were Poldi and a mystery such an ideal fit?

I thought it was a good solution for me as a writer because I’m quite familiar with crime fiction. If you want to make a living in Germany as a screenwriter or novelist, you have to write crime fiction; Germany is such a crime fiction country. Genre always gives a really nice framework for stories because if you can deliver what the audience expects, then the audience is prepared to go far with you. So I knew that crime fiction could be a good background for narrating something else.

But it turned out that it really matched the character, because later my aunts told me that the original Poldi’s father was indeed a police inspector. He was solving murder cases in Bavaria. I didn’t know that. As always when you start writing a novel things fall into place. So it was with Poldi too. I felt very comfortable making it a murder mystery. Of course it’s not only a murder mystery. It’s a story about failing and the necessity of failing. You need to be prepared to fail in life in order to have some success. It’s also a love story between an aunt and her nephew, and of course it’s a story about Sicily.

Her relationship with her nephew is so touching because they’re really so invested in each other’s lives.

It’s the classic duo. It’s Don Quixote and Sancho Panza. One is always prepared to go for adventure, who wants to change everything,  The other one wants everything to stay as it is, just have a good life, and is afraid of everything. These two characters—and they weren’t invented by Cervantes, they were invented very, very early in the history of narration—allow us to separate the two psychic energies that everyone has and distribute them between two characters.

But it’s really fun to write the nephew because a dramatic and glamorous character like Poldi really needs such a nerd. Of course there’s a blueprint for the nephew. I won’t tell you who it is but you can guess. (laughs) I still wear these navy blue polos. In Sicily, I’ve always been the uncool cousin.

I would imagine over the course of the next few novels we’ll get to see Poldi’s affect on the nephew and vice versa.

Of course. And I hope I don’t spoil too much, but in part two he will buy a yellow shirt. And like me, he will start smoking for the most stupid reason ever. (laughs) The nephew has a little development but not too much, because that would ruin the character. He mustn’t be too cool. (laughs)

And finally what role have libraries played in your life?

I have a very intense relationship to public libraries. After my parents got divorced, my mother was alone with three kids with not a lot of money. It wasn’t possible to buy many books, but then I discovered the public library around the corner. It was a miracle. Here was a place you could go and borrow as many books as you wanted just for a timestamp. And you have four weeks to read them and then you bring them back to get fresh ones? It was so amazing.

I love doing readings in public libraries with my YA novels. I try to give kids the sense of the place they are in because there are so many books they can grab randomly that will be so interesting. Public Libraries have been a magic place for me.