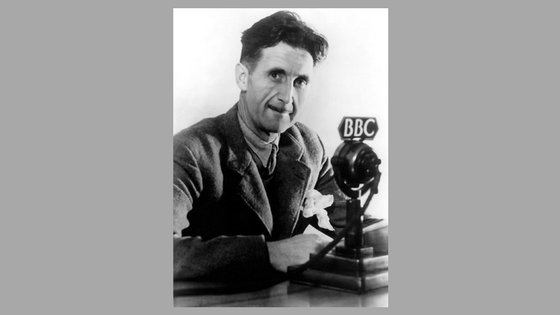 Although George Orwell is perhaps better known for his scathing attack on totalitarian Stalinist communism in Animal Farm, and his dystopian futuristic novel 1984, he also wrote an engaging short piece in 1947 called “Books vs. Cigarettes” [1]. In this brief essay Orwell discusses a reluctance among many people to purchase books because of their perceived expense. Orwell challenges this general prejudice through an examination of the relative cost of book buying compared to the cost of other items and pursuits. In calculating his expenditure Orwell conducted an inventory of the books in his flat, most of which he had purchased over the preceding 15 years (the fourth component of this list may elicit a knowing smile among librarians):

Given to me or bought with book tokens. 33

Borrowed and not returned. 10

As Orwell estimates he has approximately the same volume of books in a second location he then doubles this number before calculating an average cost and adding in his annual expenditure on newspapers, periodicals, and journals:

So my total reading expenses over the past fifteen years have been in the neighbourhood of £25 a year… Twenty-five pounds a year sounds quite a lot until you begin to measure it against other kinds of expenditure. It is nearly 9s. 9d. [sic nine shillings and nine pence] a week, and at present 9s. 9d. is the equivalent of about 83 cigarettes (Players) [3]

Thus Orwell determines that his intense reading ‘habit’ costs less per week than a packet of cigarettes per day. In the modern era a frequently used metric in cost equivalence calculations is The Economist’s Big Mac index interactive currency-comparison tool [4]. Taking a more historical perspective it is interesting to note how the cost of a packet of cigarettes has performed a similar benchmark in the past [5].

Penguins
The comparative metric of the cost of a packet of cigarettes is perhaps most notable in literacy circles in relation to the creation of Penguin books. As Cinamon notes “There is no other major publisher in the world whose history has been recounted in such incredible and intricate detail”[6]. The story goes that in 1935 publisher Allen Lane was waiting for a train after a weekend meeting with Agatha Christie when he tried and failed to buy a quality book at an affordable cost.  In response he conceptualised widely available “intelligent books” that would “cost no more than a packet of cigarettes” (about sixpence a packet at the time). It should be noted that, at the time, paperbacks were generally regarded as “dirty rubbish” by established respectable publishers [7]. George Orwell perhaps glibly responded to the threat posed by this new publishing model with his statement “Penguin Books are splendid value for sixpence. So splendid that if other publishers had any sense they would combine against them and suppress them” [8].

Penguin’s first ten books featured contemporary writers such as Ernest Hemingway and Agatha Christie and were an immediate success. They also made a visual impact with their iconic logo and distinctive cover designs, which were color coded by genre: orange for fiction, blue for biography and green for crime. The initiative proved incredibly popular and the commercial viability of the first run was assured when Woolworths agreed to purchase 63,500. Within one year Penguin had sold 1.3 million books [9]. Further growth followed as Penguin launched the Armed Forces Book Club in World War Two and supplied books for British prisoners of war (POWs). In response to the Battle of Britain and food rationing and shortages Penguin also published popular works at the beginning of the war such as Aircaft Recognition and texts such as Keeping Poultry and Rabbits on Scraps. In the early days of the war Penguin benefited from regulations related to rationing as allowances for paper were based on prior sales, an area in which it had excelled. Penguin also benefited through an agreement in the war in which it published books for Canada in return for wood pulp.

Penguin books brought elite culture to the masses. In 1946 Penguin released Homer’s The Odyssey translated by E.V. Rieu.  Penguin managed to maintain a phenomenal breadth across its range by cross-subsidizing between sectors to support its educational mission. Penguin maintained a campaigning agenda, publishing Joyce’s banned Ulysses and later went to court for publishing D.H. Lawrence’s Lady Chatterley’s Lover when charged under the UK’s Obscene Publications Act. It should be noted that the social impact of the Penguin good books at low prices model was felt not only in the U.K., but also in Australia, New Zealand, Canada, Africa, and the US. Such was the success of Penguin that over time it became an institution of national importance, like the Times or the BBC, willing to go to court when necessary to defend its position.

Lane followed in 1937 with a similar non-fiction budget book venture when he launched Pelican books. Legend suggests that Lane got the idea for the name when he overheard someone trying to buy a Penguin text mistakenly asking for “one of those pelican books.” The “Good books cheap” philosophy, which also priced these nonfiction books at sixpence, was so successful that by 1968 Pelican launched its 1,000th volume. These texts which had an equally distinctive design, featuring a light blue spine, brought an array of disciplines to the general populace including science, politics, history, archaeology, astronomy, psychology and, sociology. From a gender perspective it is interesting to note that the first Pelican book published was George Bernard Shaw’s The Intelligent Woman’s Guide to Socialism, Capitalism, Sovietism, and Fascism.

Cost of a Mass Market Paperback vs. The Deadliest Artifact

Using the cost of a packet of cigarettes metric discussed by Allen Lane, it is interesting to compare this with the cost of a paperback throughout the US. It should be noted that tobacco use continues to be the world’s leading preventable cause of death, killing approximately 6 million people annually [10]. Estimates suggest this will rise to 8 million by 2030 [11]. Given the significant toll on both morbidity and mortality arising from cigarettes, it is no surprise that cigarettes have been described as “the deadliest artifact in the history of human civilization”[12]. Tobacco related illness demonstrates clear socio-economic differentials, with less affluent groups exhibiting far higher rates of mortality and morbidity [13].

In 2015, the Library Materials Price Index (LMPI) Editorial Board of the American Library Association (ALA) determined that the 2014 average price of a mass market paperback (MMP) was $7.10 [14]. Whereas book prices tend to be more uniform across the US, cigarette prices show more variability as certain States and localities have accepted, while others have rejected, so-called “Sin Taxes” [15].

Figure one (below) details US states by whether the average cost of a packet of cigarettes (based on 2015 LMPI data) is higher or lower than the price of a mass market paperback (based on 2014 data from the Tobacco Tax Council) [16]. 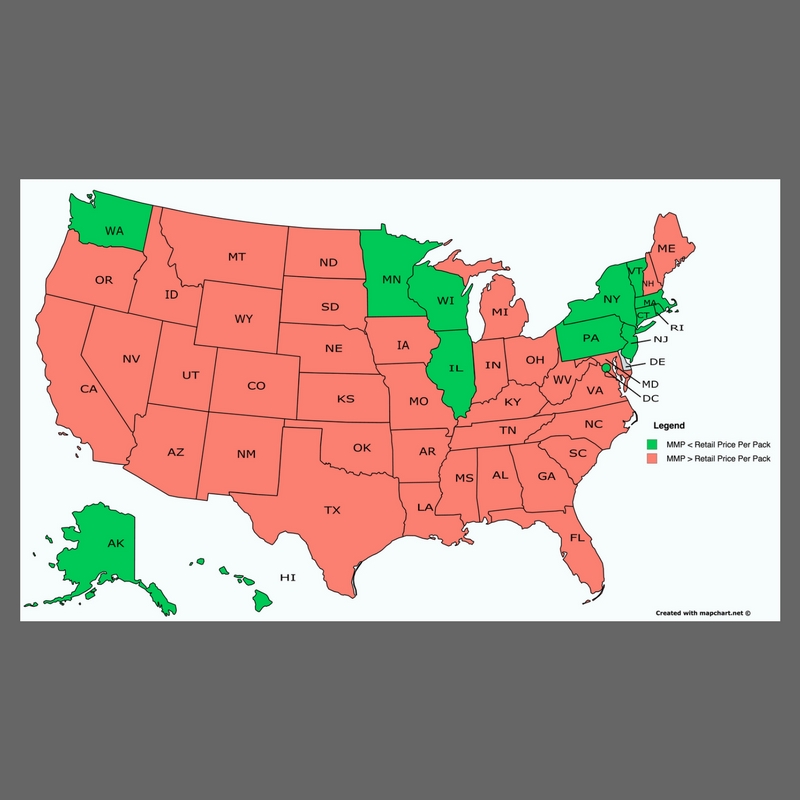 Please note that this map is simplified as it focuses on state cigarette taxes and does not include local and county level taxes. Some states prohibit such taxes while others may have a myriad. For example:

It is essential that all librarians and educators actively work to promote equitable access to a range of literature. Cigarettes should always be more expensive than a mass market paperback. Allen Lane’s original yardstick, which defined the Penguin brand of quality books being available for less than the price of a packet of cigarettes, remains an essential guide. It is alarming that based on the map and analysis above, this is seldom the case across the US. The adverse health outcomes of tobacco have been shown to exhibit a clear elasticity of demand, whereby price increases on cigarettes result in improved health [17]. Given an annual death toll of almost 500,000 per year in the US alone [18] educators and librarians need to promote both access to literature and raising tobacco related taxes. Money spent on “books vs cigarettes” therefore will promote health and develop and free minds, rather than causing irrevocable to damage to people’s bodies.