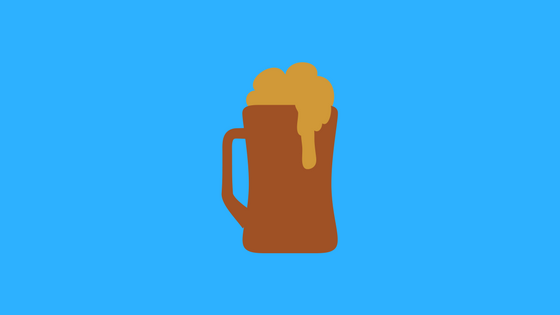 Craft breweries are incredibly popular these days, with new breweries popping up or shutting down seemingly every day. A new university archive dubbed The Brewchive™ hopes to keep alive the memories of the dozens of breweries located in San Diego County.

The Brewchive™ is housed at California State University, San Marcos in San Diego’s North County area. It is intended to store materials related to craft brewing in San Diego over roughly the last 30 years, since the craft beer resurgence[i].

In the late 1980s, San Diego County was host to five or six craft breweries. By 2010 the number had climbed to 43, and at present there are 156 breweries operating in the county, according to CSUSM Special Collections & History Librarian Judith Downie’s count[ii]. These breweries include nationally known breweries like Stone, Karl Strauss, Green Flash, and Alesmith. “Our goal is to save every brewery we can get a hold of including those that have closed,” Downie said[iii].

A special focus for Downie is women’s history in the brewing movement. In her research into pre-Prohibition brewing, Downie noticed a lack of information about any women who might have been involved. “I’m very concerned that you can find a mention here and a mention there, but if we don’t capture women’s history right now, that’s going to disappear,” Downie said[iv].

The collection, viewable online, currently hosts newsletters from a local homebrewing association as well as brewing logs and scoresheets from homebrewing competitions. It will soon have recorded oral histories from local brewers, homebrewers, and others associated with the brewing business[v]. The collection will eventually include realia like tap handles, growlers, and shirts, as well as ephemera like coasters, menus, stickers, and decals. Downie is also working on saving items from social media, where a lot of marketing is currently done for breweries[vi]. 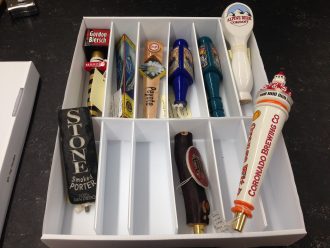 Various tap handles that were donated to the Brewchive collection. Photo Courtesy of Judith Downie.

Downie is collecting items from breweries around the county a little at a time, sometimes purchasing small items like stickers out of her own pocket and sometimes receiving donations from breweries who are interested in being part of the archives[vii]. Stone Brewing, a brewery that distributes nationally, is in the process of giving its archives to the Brewchive™, and once those items are cataloged and stored properly Downie hopes to get more official archive materials from other brewers[viii].

This isn’t just a fun project for the library; it will help support research at the university including that of students in the upcoming Engibeering™ certificate program for students interested in the science and marketing of brewing[ix].

The archives will also be open to the public, and a small number of brewing books from Stone’s archives will be available for reference use.

Although the Brewchive™ is a large project for the university, it could be replicated on a smaller scale at many other libraries. “There are so many opportunities,” Downie said. “Even if libraries start in a very small way collecting local history or working with historical associations it can be a win win for everyone.”

[i] Judith Downie, Special Collections and History Librarian at California State University San Marcos, in a phone interview with the author, November 14, 2017.