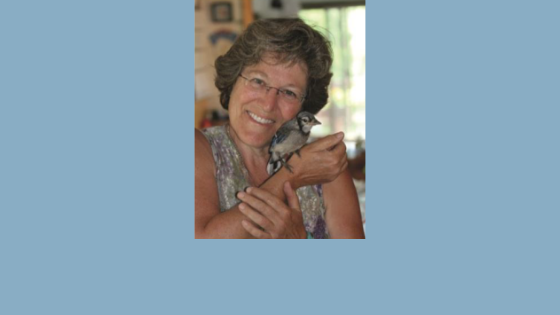 When wildlife expert Julie Zickefoose received a photo of a dehydrated blue jay, she had no idea the profound effect the bird, who Zickefoose named Jemima, would quickly have on her life. What followed was a herculean effort on the part of Zickefoose and her family, where they nursed Jemima back to health, released it back into the wild, and then strategized how to give Jemima medical attention when the bird came down with a dangerous disease. Zickefoose’s memoir about this human-avian relationship, Saving Jemima: Life and Love with a Hard-Luck Jay, serves as both love letter to this resilient blue jay as well as a fascinating long term analysis of a species that rarely permits itself to be studied. Zickefoose, who might be familiar to readers from her frequent appearances on National Public Radio, is the author of numerous books, including Baby Birds: An Artist Looks into the Nest and The Bluebird Effect: Uncommon Bonds with Common Birds. Of her latest book, Booklist stated, “Zickefoose has produced another hard-to-put-down winner” while Library Journal hailed it as “a heartwarming account for all interested in natural history, especially birds, animal behavior, and wildlife rehabilitation.” Brendan Dowling spoke to Zickefoose via telephone on September 12th, 2019.

Before reading the book, I had a lot of misconceptions about what a blue jay was, in terms of being kind of a bully, but they’re very different.

They’re amazing birds; they’re such fun to watch. The way they interact with each other is amazing. They definitely have a very poor reputation, very much maligned. A huge stomach content analysis of 600 jays’ stomachs showed a tiny, tiny percent had any vestige of nestlings or eggs in their stomachs; it was mostly plant material and insects.

You write about how there aren’t a lot of books written about long term studies of blue jays. Why is that?

That’s because they’re too intelligent to be trapped more than once. That was something that I found out in the writing of the book. Anybody who has ever netted them never nets them again. They don’t willingly fly into the same situation where they’ve been trapped more than once. That makes it very difficult to recapture them and band them, to get any banding returns. They’re just going to see a mist net set-up and say, “Nope! I’ve done that once.” (laughs) They’re very suspicious, crafty birds.

Reading the book, you get a sense of Jemima’s personality in the book. For you as a scientist, how do you capture a bird’s personality without resorting to anthropomorphism?

One of the basic tenets of writing about animals and birds is to show don’t tell. If you sense that the bird is feeling melancholy, you just leave it at, “She sat puffed up with her eyes half closed for the rest of the day.” You don’t write, “Jemima was feeling very sad and was crying blue jay tears.” You try to maintain somewhat of a distance. You try to demonstrate what the bird did that might indicate its state of mind rather than projecting your state of mind on it.

One of the sweetest parts of the book is the relationship between Jemima and your terrier, Chet Baker. Can you talk about how they interacted?

It was so adorable. It was just amazing. As background, since I do bird rehab, I trained this dog as a tiny puppy never to harm birds. You wouldn’t want to be a chipmunk around him, but he was awesome with birds. If it had feathers and flew, he would stop in his tracks; he would not chase it. We had that going for us. Chet knew that he couldn’t harm a feather on this bird’s head. So basically Jemima just had her way with him. She would pound on his toenails and sit on his head and hop along his back. He didn’t enjoy it, but he didn’t retaliate either. Basically his role was to put up with her and she just took full advantage of that.

But the behavior she was exhibiting was typical of affection for a blue jay, right?

As I said in the book, they pound on the things they love. I had three jays the summer after Jemima, and they opened holes in my arms! They would just land on your arm and start pounding on you, which most people would not be happy about. (laughs)

You’ve truly suffered for your art.

I have suffered. I’ve bled! (laughs)

The paintings you’ve done for the book are so beautiful. As an artist, how do you decide which moments to capture in your work?

I need something that speaks to me that also tells the story. As I would in illustrating any manuscript, I read it carefully thinking what visuals I could bring to it. I try to choose the most impactful way I can to continue to tell a story in paint. It was a joy to come up with twenty chapter head paintings for this book because normally I’m painting everything, illustrating the entire book with my paintings. This was like a vacation for me to only have to do twenty paintings, instead of several hundred.

At one point in the book, you write, “The more I work with birds, the more I believe in the undreamt.” Can you talk about what you meant by that?

Always give birds more credit than you would be inclined to, for intelligent behavior, for innovative behavior, for thoughts, for goals, for emotion. You can never go wrong by being open to the possibility that they are interpreting and experiencing their world in a way very similar to the way you look at your world. If you observe them with that in mind—that this is an intelligent creature with a goal, it’s not just walking around like a dunderhead, it’s moving through its environment with intention—that’s the magic key. If there’s anything I hope people will take from my books, it’s a greater respect for the mental capacity of birds.

Right after Jemima was released, it was hideously hot. She screamed at the front door for me to open it. I opened the door and she dove into the dog’s water dish in the kitchen. It was clear she had a goal, she had a plan, she needed me to help her. It was so funny to have her use me in that way. “Open the door I’m hot out here!” It’s way beyond what people would think a bird capable of, but it was pretty much normal behavior for her.

Some readers might be familiar with Jemima from her appearance in Sex Lies and Butterflies. What was involved in getting her ready to be filmed for that special?

I was hanging by my nails the whole time the cinematographer was here because I had no idea what she would consent to do. The original plan had been to put her in a box with a green screen and I said, “She’s not going into any box. (laughs) She’s a free-living bird with free choice and we’re going to have to work with that.”  That was the challenge and agony of it. Eventually when I removed myself from the proceedings she behaved beautifully. (laughs) I was too intense. I was like the stage mother who nobody wants around.

One thing I walked away from the book was the metaphysical connection you have with birds and how birds present themselves to you and how you come into birds’ lives. Can you talk about it?

Not really. I can feel it, and I can imply. The classic example, just an everyday thing for me but something that may or may not be a coincidence, as you know by reading the book, my husband passed away in March. His absolute favorite warbler was the black throated blue warbler. About four days ago I’m having a chat with a friend of mine—just about the ins and outs and ups and downs of my marriage to Bill—and this male black throated blue warbler, Bill’s favorite bird, comes right up to this window. It’s fluttering like it wants to get in, then it’s hopping around, and it lands on the bird feeders. Three different times it looks into the studio right at me like, “I really loved you. I really did. It may not have worked out that well, but here I am.”

So I’m like, “God, that was so cool.” Then yesterday, talking with another friend about Bill, a female black throated blue warbler comes and does the same thing right outside my window. I prefer to think that something is going on there. It makes me happy and it doesn’t hurt anybody for me to think that. That’s where I come down on it. I certainly don’t put it right in people’s faces like, “Did you know that my husband comes back as a warbler?” I just enjoy it and I feel accompanied. Birds are the messengers for me.

That’s so beautifully conveyed in the book about how different birds come into your life at seemingly fortuitous times.

It’s absolutely uncanny. And I’ve had people say, “Why does all this cool stuff happen to you?” I guess I’m out there ready for it.

I wanted to ask about your blog. Can you give some information about what you’re doing with your blog?

I’ve been blogging since dinosaurs roamed the earth in 2005. I started out blogging every day and I was so caught up in it. I did that for a few years and then cut back. I blog as I’m able now because I’m so busy launching the book. I actually feel a physical need to do it. I really enjoy sharing what I find beautiful in the natural world. My goal is to help people connect better and be open to those experiences themselves. I love it.