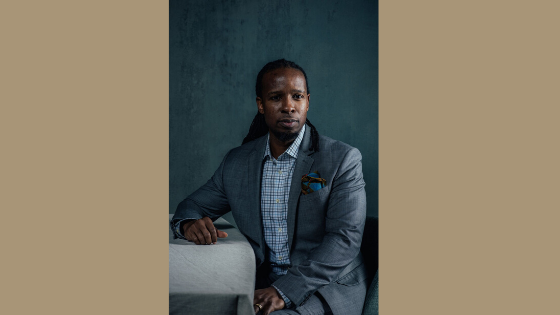 National Book Award winner Ibram Kendi’s How to Be An Antiracist is a valuable (and highly readable) resource for readers looking to dismantle the racist structures in their lives and communities. Kendi rigorously examines the many ways racism is interwoven into the fabric of our daily existence, and then leads readers through his personal journey of deconstructing the racism present in his own life. An invigorating memoir as well as a fascinating exploration of our country’s history, How Ro Be An Antiracist has been showered with praise by critics. The New York Times Book Review named it one of the Best Books of 2019, and Publishers Weekly hailed it as “a boldly articulated, historically informed explanation of what exactly racist ideas and thinking are.” Kendi spoke with Brendan Dowling via telephone on December 17th, 2019. Photo Credit: Stephen Voss

Can you talk about how you draw the distinction between being a nonracist and an antiracist?

Throughout the book, you share stories from your life that illustrate your own journey with antiracist thinking. Why was it important for you to share your own personal experience in this book?

I did not initially want to share my personal experiences. I’m a very private person, but I also recognize that discussions of race and racism are very personal for people. When we’re thinking about these abstract ideas, people are constantly applying it to their own minds and their own ideas. But I also realized that being antiracist is essentially a day by day process and a journey of self-transformation. There was no way to explain that without using the story of a person. I felt that my story could help share that larger point of a journey, of self-criticism and self-transformation.

I think the other reason I chose myself as a sort of subject was because I also knew what I was thinking at different moments. With other subjects, I obviously can’t say definitively what they were thinking. Part of the moment to moment reflection is not only what we’re saying and doing, but what we’re thinking. It really allowed me to delve into the totality of what’s happening at any given moment, in which we’re not only thinking, we’re saying and we’re doing it.

In the book you trace the connection between capitalism and racism. Can you talk about how the two are linked?

Like the term racism, capitalism is a term in which there’s wide disagreement on what the word is. The way I ended up defining it was historically capitalism was an economic system that emerged at the same time and the same place as racism, through the slave trade, through colonialism, and through chattel slavery. Empirically it then led to not only inequity between classes, but also inequity between race classes. That then led to white people being disproportionately wealthy—and that’s not just white people in the United States but even white countries—and black people being disproportionately poor. The poverty of black people cannot be separated from both racism and capitalism, at least in the way that I’m reading history. For me, based on that historical and also empirical analysis, it seems capitalism and racism are intertwined, and therefore in order to get rid of one is to ultimately strive to get rid of the other.

How do you see public libraries fitting into this movement, in terms of being antiracist spaces and helping their patrons be antiracist?

I think racist ideas cause people to be ignorant and hateful. Racist ideas are not only circulated through the media, but they’re also circulated through books. We need books that are counteracting those racist ideas with antiracist ideas, with analysis and examinations of racist policies. Obviously public librarians who acquire these books, highlight these books, and bring authors of these books to public forums at their library are essential. At a more basic level, racist ideas love believers, not thinkers. If there’s ever a profession and a space in our society that breeds thinkers, it’s public libraries. Even just the sustenance of these institutions is, to me, counteracting racism.

Can you talk more about how racist ideas need believers not thinkers?

Racist ideas are meant to be believed. In other words, they’re not meant to be built on data, science, or logic. They’re not derived from evidence, observation, or experience; they’re derived to make people believe them. For example, I want people to believe that black people are dangerous so they don’t oppose the policies that are leading to their mass incarceration. They’re created to view people as the problem. While to me, thinkers are people who are constantly reflecting. Thought, at least intellectual thought, is based on evidence—and not based on biased evidence, not based on looking for something to prove what I already believe—but truly unbiased evidence.

How do people then best live as an antiracist?

I think individuals must constantly think about changing themselves to change society. In other words, what racist ideas have I consumed over my lifetime? What racist ideas do I hold now that’s causing me to support a particular policy-maker, to oppose a particular policy, to make a particular decision about my own life or the lives of people I hold dear? To be anti-racist is to reflect on those things—to identify them, to critique them, to ultimately seek to rid ourselves of them—and adopt their anti-racist counterparts. That reflection leads us to instead of making a decision to get as far away from black people as possible, we make everyday decisions to treat black people like they’re human. Humans need the same things all other people need, which are opportunities and resources. To be antiracist is to be part of that struggle to ensure that all groups have relatively equal levels of opportunity.

You and Ashley Lukashevsky have a board book coming out in June, Antiracist Baby. How did the book come to be and what is your hope for the book?

It was actually something that my editor approached us about. It was also something that I was actually thinking about, because I have a three year old daughter and I of course read quite a few board books to her. Through reading pretty much all the books that are available on racial issues, I realized that there was a gap, and that this type of book could be useful. I also realized through my own study that even infants and toddlers are learning, consuming, and responding to racist ideas. We literally have to start as early as possible to counteract the widespread cultural conditioning that causes us to view people as fundamentally different or better or worse because of the color of their skin. The earlier we can teach our children, the better. The earlier we can teach them that, the earlier we can arm them so they don’t have to go through the same journey we’re going through. Their journey can be a few months as opposed to a few decades.