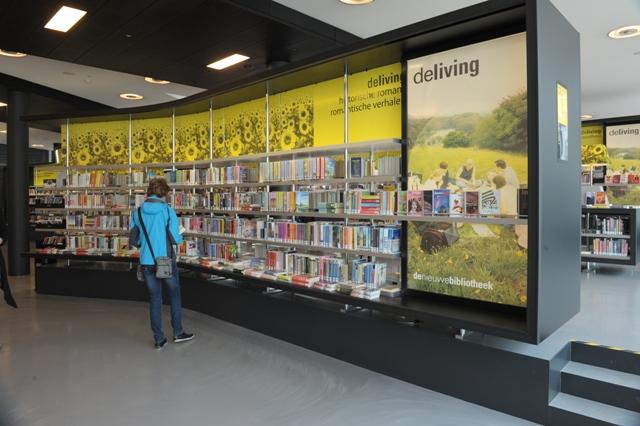 What makes a group of librarians from all over the world want to visit the public library of a Dutch city of 180,000 inhabitants? The participants of the 2013 MetLib conference, held in Amsterdam Openbare Bibliotheek from May 5 through 10, had the chance to experience the so-called retail concept in the new library of the city of Almere, a place which attracts a lot of professionals.[1] 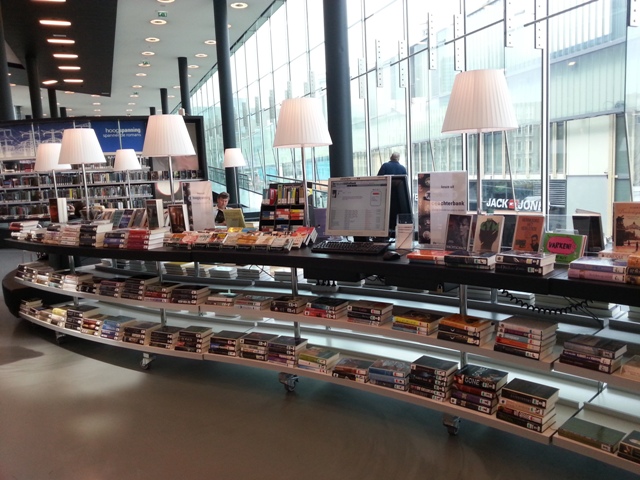 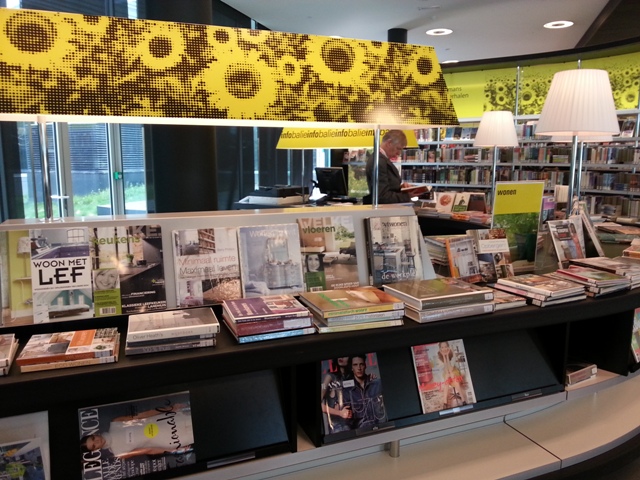 Perfect for Browsing – at Almere Library

From the first steps inside what can be considered a wow building, the first thing you think of is bookstores, as you see a huge row of books piled horizontally according to the same cover colors. It’s a shock. Face-out and horizontal displays are frequent through the whole library. The displays at the entrance refer to other areas of the library, called winkels (stores), each one with a name and a specially designed signage: “De living” (living room), for instance, with sunflowers and a vivid yellow background everywhere, is dedicated to women and contains books about cooking, health, gardening, interiors design, etc.  Another store is “Hoogspanning” (High tension) and contains finance, computer science, management; both areas include fiction. Dewey is not the shelving guide anymore and the visit to the library is transformed into a shopping experience. It’s another shock. The library has a lot of stand-alone displays with books, cds,and dvds. Don’t worry now: the library has more or less traditional (but amazing) spaces for cds/dvds, children, teenagers, and videogames. There are also closed study-rooms.

Everything started with a customer survey ten years ago, when the city of Almere decided to build a new library, which opened in 2010. The survey highlighted that “80% of [the library] customers do not visit the library with a specific idea of what they want to lend and make their choice by browsing the collection,” customers also noticed “the rather boring interior” of the old library [2]. In 2008 the Metropolitan Library System in Chicago obtained similar findings adopting a combination of observation, interviews and video to study users’ movements, experience and behavior within the library: “two-thirds [of the visitors] did not know what they wanted before they arrived” and “56 percent spent less than ten minutes in the library” [3]. One year later Ela Area Public Library in Lake Zurich (Illinois) reorganized their Popular Materials Department according to retail models: more displays, face-out shelving, more spaces to browse. Consequently circulation increased without further acquisitions. Observation emerges as a key method. An interesting project in some Norwegian public libraries considers 14 different activities and, after rounds of observation through the various functional zones, came to the conclusion of three types of users: “classical,” “social,” and “digital” [4].

However the most strategic factor to obtain change is the training of staff and this was as true in Almere as in New Zealand, where an impressive training program, Best Sellers, has taken place since 2008, deliberately mashing up readers advisory with the principles of retail librarianship, with the aim of winning the competition with book retailers in the business of books and reading. About 300 librarians (in 2010) were involved through workshops, meetings and conferences about the core components of readers advisory work, which are a mix of the traditional (use of RA websites and blogs, interview techniques) and the modern (visual merchandising, book reviewing techniques and promotional activities). As Paul Brown considered, the crucial change for libraries is a shift from “hub” to “habit” of the community, that is from a passive location to an intuitive action [5].

The circle is closed: the 2014 Metlib conference will take place in Auckland!

[4] Tord Høivik, Count the Traffic. What do users do at the library? http://www.slideshare.net/plinius/count-the-traffic-presentation-572753, presented at the 2008 IFLA World Library and Information Congress in Québec