Public libraries were in the spotlight at the World Library and Information Congress, 79th IFLA General Conference and Assembly, in Singapore (August 17-23, 2013), with the theme Future Libraries: Infinite Possibilities.

Public Libraries as Placemakers
Creating a model program for the building and redesigning of future public libraries is the aim of  research co-funded by the Danish Agency for Culture and Realdania, a philanthropic association. In Denmark new libraries are user-oriented (rather than collection-oriented) and self-served. Jens Thorhauge reported about the current state of the research, which started from a careful analysis of the recent literature about city-planning and the role of libraries, then continued with a series of visits to some of the most inspiring libraries in Northern Europe. Some common trends in place-making are “the effort to create centers and identity in new urban spaces,”to revitalize “urban spaces in cities or neighborhoods that lost their traditional function” and to update or qualify and innovate “urban spaces that are already recognized” [1]. The design principles, under development during this summer, will consider four library goals (experience, involvement, empowerment, and innovation) and the four-space model tool: the learning space, the inspiration space, the meeting space, and the performance space. These spaces can be virtual or physical.

During spare time I visited a branch which is embedded at the top floor of one of the omnipresent shopping malls of the city, library@chinatown. Volunteer-run and created by private donations, the location has no reference desk but self-service stations and a cybrarian kiosk patrons can use to phone a librarian in case help is needed. Newspapers are available in print and via three large screens for browsing electronic versions of international newspapers. [2] 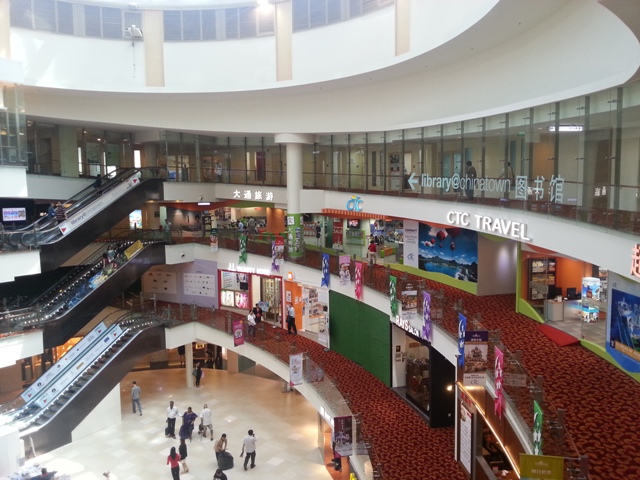 Outside view of library @ Chinatown Singapore 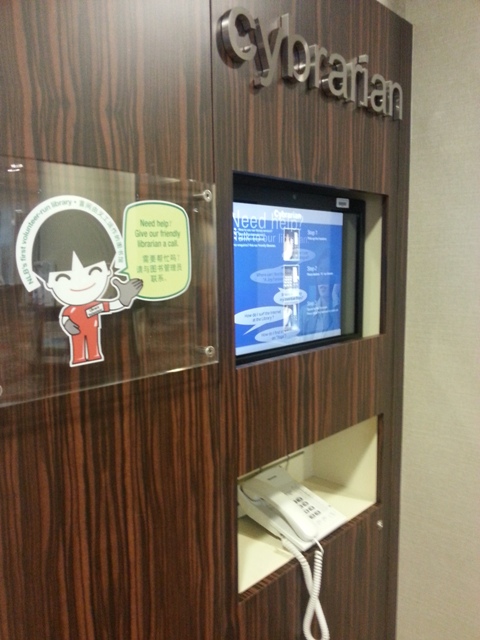 Cybrarian at the Library @ Chinatown branch library in Singapore

Public Libraries and E-reading
A day-long program was dedicated to e-books. Keynote speakers detailed the recent evolution of the book market, and six speakers illustrated the challenges in each continent, showing the enormous gap between Africa / Latin America and the rest of the world. Those two regions are left behind, due to lack of broadband coverage or budget.The second part consisted in the presentation of two case studies from Norway and Canada, and a look at the situation in Singapore, followed by a world café-style discussion on market/business models, advocacy and legal issues. [3]

Two initiatives were illustrated : the first is The right to e-read, a campaign launched by EBLIDA (European Bureau of Library, Information and Documentation Associations) last May and based on a joint action of European library associations, lobbying the EU for a clear copyright framework which would allow libraries the acquisition and lending of e-books for the benefit of the citizens. The second one is the ReadersFirst movement, which, facing the challenges of the e-book scenario (in availability, discoverability, and access), advocates with vendors and endorses some clear principles, such as the possibility to “discover content in a single comprehensive catalog,” to “access a variety of e-content from multiple sources,” to “interact with the library within the library’s own context,” and to “read e-books that are compatible with all readers” [4].

Public Libraries and Collaboration
Collaboration in statistical measurement should “start with the statistics librarians actually use on the job” in order to improve their practices, according to Tord Høivik, who surveyed the global situation and noticed that, even when countries have good statistics at the national level, they lack “extensive, user-oriented web publishing of the data.” He mentions the main bottom-up examples, such as the German project BIX, the Global Libraries program, the LJ Index, and the  Edge initiative. [5]. I would add the project of the IFLA Metropolitan Libraries Section, conducted by Toronto and Helsinki Public Libraries with an online platform provided by Toronto-based company Counting Opinions. The last report analyzed 2010 data from 59 public libraries of 25 countries. The project has been financed by IFLA during the last three years but is now looking for new funding to continue.

Consider evaluating resource sharing in your library by completing the Rethinking Resources Sharing STAR checklist. Brenda Bailey-Hainer and Evan Simpson illustrated that initiative and some cooperative projects involving public libraries in the US, such as the IDS Project and COKAMO.

Other News
The conference was the location for the launch of the IFLA Trend Report, the result of a year’s consultation of experts from various sectors, who identified five top level trends affecting the information society. They include access, learning, privacy, empowerment and new technologies, and are intended as debate-starters for the library community.

Last, but not least, posters can sometimes be a captivating way to catch your attention on a small project or activity. My favorite two at this conference were both related to social networks: What does it meme is a Philippine project which uses memes for library promotion and Digitalgud. Cataloguing can be fun!,  an Estonian project to promote collections and crowdsourcing through Facebook.

REFERENCES
[1] Jens Thorhauge, Creating a model-program for the building of future public libraries and their role in culture led redesign of urban spaces, p.7-8. Maija Berndtson explored the topic of the need of public spaces in Public libraries and placemaking.

[2] I also visited library@esplanade which is located at the Esplanade theatres and whose collection is centered on music, film and the performing arts. It offers a fully-geared “Silent Studio” and a piano practice room. Also the Green Library for children at the Central Public Library impressed me (and my little daughter) for interior design and the recycling of materials. 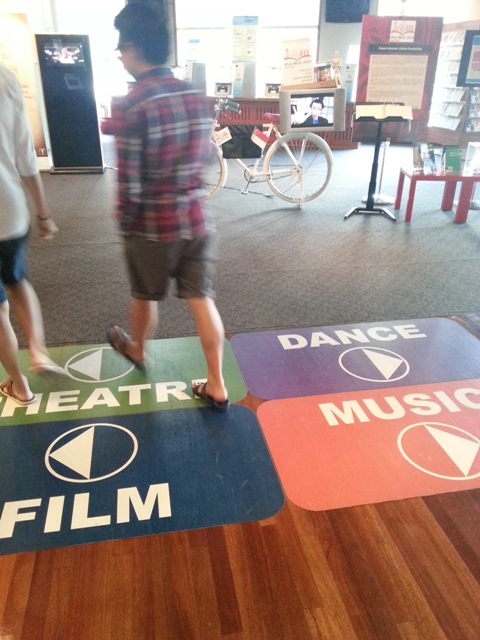 The entrance to the library @ esplanade – Singapore

[3] See the report on IFLA Express. YS Chi (IPA) explained his nine “E’s” of the publishing industry: excess, easy, expensive, enigmatic, experimental, experiential, ephemeral, empathy, eternal. Québec showcased their experience with e-book vendor DeMarque. Ivan Koh from the National Library Board of Singapore mentioned their partnership with Singapore Airlines for e-books on flights and with the US Embassy for donations of e-resources and devices. In Singapore the use of devices is very low compared to smartphones.

[4] From slides presented at the conference.

[5] Tord Høivik, Improving practices. Statistical standards in global libraries, p.3. He is well known by IFLA-goers for his ground-breaking studies of the the behaviors of library users through observation.